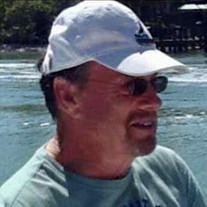 On Sunday, December 20, 2020, William Carl Nelson, loving husband and father of two, passed away at the age of 78. Bill was born December 15, 1942 in Mt. Home, Arkansas to George Nelson and Wilma (Nelson) Hollis. He married his beautiful wife, Carol in March of 1960 and had a life full of adventures. They had two wonderful sons; Mark and Rob, and two beautiful grandchildren, Alex and Austin. Bill joined the Air Force in 1960, and after basic training went to Japan where he became a fighter jet mechanic. After his service to our country, he then took these skills with him as he started to work at McDonnell Douglas. He worked on the flight line as a mechanic. He then went to school to become a tool and die maker. Later in life he worked for two airlines, Ozark Air and TWA where he was an air and power mechanic. He left the airlines to become self-employed and owner of Nelson Restorations. He worked on restoring and rebuilding European classic cars, specifically Mercedes. His final position before retirement was the curator of Kemp Auto Museum, where he looked after some of the very cars that he restored, including two Gull-Wing Mercedes. He was able to retire at age 65 and spent the remainder of his life with his wife at his side working on his life’s passions. Bill had many loves in life. He lived each day to the fullest. He spent his time traveling the world, diving the oceans, and tinkering in his garage. His favorite adventure was watching his grandchildren grow up. He loved to go to many of their games and activities where he could cheer them on from the sidelines. He and Carol were able to complete their lifelong dream and bought a home in Florida. They became Senior Spring Breakers and would spend the winter months with all of their wonderful friends at Tropic Schooner around their pool and at the beach watching the sunsets. He would spend the summers with his family in St. Louis babysitting his grand-dog, Billie Bob Tail which is his namesake, and operating his EBay business. He spent his mornings at the kitchen table relaxing and chatting with Carol and his afternoons were spent in his “office” down in the basement where sat surrounded by his lifetime of work and accomplishments. He will always be remembered for his wonderful jokes, his kind ways, and his strength. He was the rock of his family and he was always a listening ear and a helpful hand to any of his friends. He will always be remembered by his family and friends sitting in his chair holding a glass of vino in his hand with his deep voice telling jokes and sharing his wisdom or slowly riding his bicycle down the Florida roads stopping to investigate all the wildlife that he would encounter. Bill is preceded in death by his father, George Nelson, and his mother Wilma Hollis from Crocker Mo. Also proceeded in death was his brother, George Edward Nelson from Richland, MO. He is survived by his loving wife of 60 years, Carol from Chesterfield, Missouri and his two children, Mark (Maureen) Nelson of O’Fallon, Missouri and Rob (Jennifer) of Collinsville, Illinois. He has two surviving grandchildren, Alex Nelson (fiancé-Tommy Bohnert) and Austin Nelson both from O’Fallon, MO. He is also survived by his siblings, Earl Nelson (D’Ann) of Crocker, Missouri, Mary Anne (Jon) of Denver, Colorado, and Jimmy Hollis of Crocker, Missouri along with several nieces and nephews. Bill will be laid to rest at Jefferson Barracks National Cemetery with full military honors.

On Sunday, December 20, 2020, William Carl Nelson, loving husband and father of two, passed away at the age of 78. Bill was born December 15, 1942 in Mt. Home, Arkansas to George Nelson and Wilma (Nelson) Hollis. He married his beautiful wife,... View Obituary & Service Information

The family of William Carl Nelson created this Life Tributes page to make it easy to share your memories.