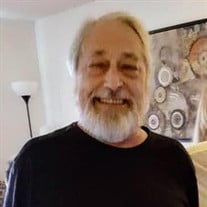 William Henry “Big Bad” Morgan, 66, of St. Peters, MO., died Friday, August 14, 2020 at St. Joseph West Hospital in Lake St. Louis, MO. He was born on January 30, 1954 in Sweet Springs, MO. Loving son of Henry and Margaret Morgan. Loving father and father-in-law of Shawn Morgan and William (Vicky) Morgan. Loving brother and brother-in-law of Ellen Sue Fitzroy, Diana Hensley, Wanda (Willie) Mathews, Sheryl Morgan and Scott Morgan. Loving grandfather of seven. Loving great grandfather of two. Bill was preceded in death by his loving father, Henry Morgan, His daughter Sara Kaltenbach and his brother Mike Morgan. Bill was the oldest of seven children. He loved his family and always enjoyed the annual gatherings for Thanksgiving and Christmas. Bill got his first motorcycle as a teenager and enjoyed riding with his dad and brother. They shared a few very memorable trips together. His love for motorcycles never faded. He also enjoyed small airplanes and would do hours on a flight simulator. He always had a thirst for knowledge and was at one time considered to be a professional student. He had a big love for animals, especially birds and cats. He became a great father of three and loved them dearly. The last twenty years of his life he found the love and soulmate of his life Maggie. They had known each other from the 8th grade. So it seems like they were friends all of their lives. So it was very natural for them to end up with one another. He became a father to Justin Keifer (Maggie’s Son) just like his very own. Maggie nicknamed him as Big Bad and that is what he was known as from then on. He battled with bone cancer and was told that life expectancy was 2-3 years. He immediately signed up for experimental drug treatments and programs. His thought was always to help anyone down the road that may be diagnosed with the same terrible disease. He went beyond the 2-3 years and made it for 10. He was a very strong man and always had a great outlook on life. Friends and family wishing to honor Williams memory may make a contribution to Five Acres Animal Shelter in lieu of flowers RIP BIG BAD YOU ARE SO LOVED BY MANY

The family of William Henry MORGAN "Big Bad" created this Life Tributes page to make it easy to share your memories.