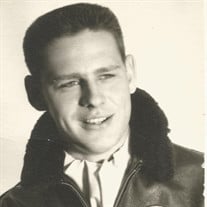 E. Wayne Fitzwater, 78, Child of God, peacefully went to be with the Lord on December 21, 2020, due to congestive heart failure. He was the loving son of the late Leonard Everett Fitzwater and Garnet Hope Barwig. His memory will be cherished and kept alive by his loving wife of over 55 years, Pauline Fitzwater; his cherished daughter and son-in-law, Kelly and Joe Steward; and two grandchildren that he adored, Kyra and Ethan. Wayne was born in St. Louis, MO, and graduated from Cahokia High School in 1960. He joined the US Navy that year and served at Pearl Harbor in Hawaii. After the service, he worked at McDonnell Aircraft. In 1969, he joined Ford Motor Company and worked at the St. Louis Assembly Plant in several Industrial Relations positions for his 30+ year career. During the early part of those Ford years, he received a Bachelor of Science Business Degree from Southern Illinois University in Edwardsville, IL. After retiring from Ford, he worked at Enterprise Rent-A-Car part-time for 15 years. Wayne enjoyed spending time with his family and friends. He was a fantastic storyteller and loved making others laugh. He had a huge heart and was kind and generous with everyone who knew him. He enjoyed playing softball and golfing when he was younger. He had a love of cars and of driving and would often take drives along the river. He loved being in nature and had a knack for capturing terrific photos of his travels. In his later years, Wayne enjoyed writing poetry and was a member of the Nashville Songwriters Association. Most of all Wayne was a man who loved with his whole heart. He loved his family, and he loved the Lord. Wayne touched many hearts and lives. He will be dearly missed. Wayne will be laid to rest at Jefferson Barracks National Cemetery at a later date. If you wish to honor Wayne, please consider a memorial in his name to OASIS Food Pantry, 1814 Boone’s Lick Road, St. Charles, MO 63301. He wrote this poem as a reminder for all of us, and it expresses him beautifully: Old Man’s Revelation What happened to the man I used to be? That, I’d sure like to know! The one that cared deeply about all mankind, Oh tell me, where did he go? Has old age ravaged his body, diminished his mind, And left a mere shell of the man I used to know? Is doing the right thing and thinking pure thoughts, Gone with the wind - my soul? Oh tell me, Dear Maker, where did I fail, At what point did I lose my way? Is there any hope for an old dog like me, Or, will I forever remain a stray? Then He revealed His “Great Truths” to me, Flashed through my mind like a raging flood! The truth is, God’s love transcends all that is wrong, Through His Grace, paid in our Savior’s blood! So, take heart old man, for your destiny’s at hand. The long journey is about to end, a new one to start. Obey His teachings; be Christ-like in all that you do, And most of all, love Him with all your heart.

E. Wayne Fitzwater, 78, Child of God, peacefully went to be with the Lord on December 21, 2020, due to congestive heart failure. He was the loving son of the late Leonard Everett Fitzwater and Garnet Hope Barwig. His memory will be cherished... View Obituary & Service Information

The family of Wayne FITZWATER created this Life Tributes page to make it easy to share your memories.

E. Wayne Fitzwater, 78, Child of God, peacefully went to be with...