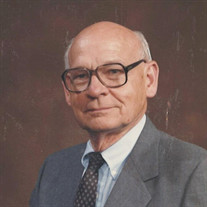 Weber, Walter H Age 97, passed away loved and at peace with family on August 15, 2020. Beloved husband of Lucille (deceased); loving father of Mark (Gayle), Steven (Sharon), Mary (deceased), Suzanne; Grandfather to Mary (Mark) Mills, Les (Butch) Ousley, Jonathan Ousley, Louise (Phil) Kuhlmann, Lauren (Matthew) LaLiberte, Becky (David) Pritchett, Samantha (Zachary) Ashby; Great Grandfather to Joshua, Jordan, Ava, Parker, Lexi, Christian, Camille, Giovanni and Vincenzo. Walter received his undergraduate degree in Mechanical Engineering from Washington University, masters from St. Louis University. He served our country as a Technical Sergeant in the Army during World War 2 spending time in the European theater as a topographic draftsman, utilizing skills learned at home from his father Herman and Uncle William. Walter retired after 40 years of service from Union Electric (Ameren). His primary responsibility was managing the construction of power plants, with his greatest achievement overseeing the construction of the Callaway Nuclear Generating Station. Following his retirement, Walter served in consulting roles within the Nuclear Power industry. Walter and Lucille started their lives in St. Louis Hills, then Rock Hill, Ballwin, Jefferson City, Columbia and have resided in St Charles county since 1986. Walter was a member of the American Society of Mechanical Engineers, Missouri Society of Professional Engineers and the Engineers Club of St. Louis. Having raised two generations of children, Walter was actively involved in their activities. Everything from youth sports, equestrian interests to Boy Scouting, he was there for his children and grandchildren. He was a leader in the Boy Scouts of America, St. Louis Area council. Walter enjoyed reading and was a wizard in his home workshop. Walter was a kind, generous and caring man who had a genuine curiosity about everything he encountered during his life. Charities benefitting from his generosity included the Sunshine Ministries and Salvation Army. He laid an admirable path for all to follow and will be greatly missed by everyone. Walter donated his body to the St. Louis University school of medicine. Due to the current health situation, his memorial service is being deferred. The family expects to honor Walter on the anniversary of his birth in February 2021.

The family of Walter Herman WEBER created this Life Tributes page to make it easy to share your memories.

Weber, Walter H
Age 97, passed away loved and at peace with family...