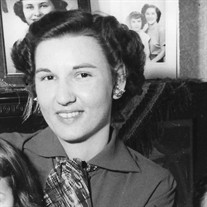 Virginia Lee Hensley, 91, of Paducah, Kentucky, passed away on Sunday, Feb. 13, 2022, in O'Fallon, Missouri, from complications of a stroke. She was born Virginia Lee Kirk on Feb. 21, 1930, in Pine Bluff, Arkansas, the daughter of Charlie Abner Kirk and Lorene (Elliott) Kirk. She married her high school sweetheart, Billy Joe Hensley, in Cape Girardeau, Missouri, on Sept. 11, 1948. He passed away in Paducah on June 26, 1997. Her father Charlie Kirk worked for the Cotton Belt Railroad and moved the family from Pine Bluff to Fornfelt, Missouri (now called Scott City). She loved riding the train to visit family and this created a life long love of trains. After graduating from Illmo Fornfelt High School in 1948, she worked in a doctor's office and various other jobs before becoming the church secretary at First Christian Church in Cape Girardeau. She and Billy Joe moved to Paducah in January 1973 where he worked for National Life Insurance. In Paducah, she first worked as a bookkeeper for Shackelton's Music Store, then, opened and managed The Family Shoe Store in Lone Oak, Kentucky, where they were known for selling kangaroo tennis shoes. Later, she turned her skill as a seamstress into a career at The Bride's Corner working in alterations. When Bride's Corner closed in 2001, she continued working as a seamstress out of her home. Virginia was proud that she was asked to make prom and wedding dresses for the daughters of women whose wedding dresses she had altered when working at the Bride’s Corner. But, she was most happy being "Gin Gin" to her grandchildren and great grandchildren. In addition to her husband, Virginia was preceded in death by her parents, a sister, Julie Dietiker, a granddaughter, Stephanie Hensley Baker, a niece, Elizabeth Hensley Sander, brothers-in-law and their wives, Harold and Emily Hensley, Paul and Sandy Hensley and Tom Dietiker, in addition to her beloved cat Ed. Virginia is survived by her son Charles Hensley and wife Marcia of Metropolis, Illinois, and their daughter Tara "Nikki" Alsip and her husband Matt and their sons Riley and Dillon Alsip. She is also survived by grandson-in-law Mike Baker and his two daughters Natalie and MacKenzie Baker. She is also survived by her daughter Deborah Burgess and her husband Donald of St. Charles, Missouri, their son John Burgess and step-grandchildren Brent Burgess and wife Mickey, Breck Burgess and wife Nicole and their children Karla and Jack, and Bryce Burgess and wife Diana James and his children Quentin Burgess and Jessica (John) Rombach. She is also survived by several nieces and nephews, James, Martha, David, Chuck, Mark, Stephanie, Todd, Stacia and Tim. She will be missed by her special friends, Lynne Owens, Evie Beal, Sharon Sullivan, Rick Sullivan, Charlotte and Ellen Harris, Nelda McDaniel, as well as Gayle Sutherland, Sue Cash and Kathy Hays all of Paducah and Geraldine Middleton of Cape Girardeau. Virginia enjoyed teaching her granddaughters to sew. She made several quilts from the embroidery blocks done by her granddaughter Stephanie that will be cherished by the family. Virginia loved the time spent with Tara sharing their love of sewing. She was an adventurous traveler, visiting Switzerland, Mexico, Greece, Italy, Hawaii and Alaska. She went hot air ballooning in Arizona, rode in a submarine in Barbardos, walked the beaches in the Caribbean, kayaked in Nova Scotia, Canada, and celebrated her 80th birthday by parasailing in St. Thomas, Virgin Islands. She loved taking many cruises with her family. She had a strong interest in genealogy and learning about her family tree. It fascinated her that her 39th great grandfather was Charlemagne. While her 9th great grandparents William Farrar and Cecily Reynolds caused the first breech of promise lawsuit in the colonies! She was able to visit Farrar's Island in Virginia (now a park called Henricus Historical Park) and walk where her ancestors lived in the 1600's. And she toured the Mississippi State House of Representatives where her great great grandfather Ellis Henderson served in 1854. During the last two years of her life, when her health began to fail, she was lovingly cared for by her family. Although ill, she was still able to enjoy socializing with friends, going out to lunch every day, playing with the goats and chickens on her son's farm, doing puzzles and taking long car rides with her grandson John. She was a member of Lone United Methodist Church in Paducah. In accordance with her wishes there will be no funeral. Burial will be private. A luncheon to celebrate her life will be on Sunday, May 1, at 1 p.m. at the Lone Oak United Methodist Church in Paducah. Friends and family are invited to attend. In lieu of flowers, the family requests that acts of kindness are done in Virginia's memory. Please read a book to a child, take someone to lunch, call a friend who is lonely, enjoy some chocolate or tell someone they are loved.

Virginia Lee Hensley, 91, of Paducah, Kentucky, passed away on Sunday, Feb. 13, 2022, in O'Fallon, Missouri, from complications of a stroke. She was born Virginia Lee Kirk on Feb. 21, 1930, in Pine Bluff, Arkansas, the daughter of Charlie Abner... View Obituary & Service Information

The family of Virginia Lee HENSLEY created this Life Tributes page to make it easy to share your memories.

Virginia Lee Hensley, 91, of Paducah, Kentucky, passed away on...