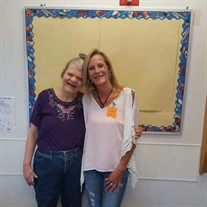 Vickie Hoffelder, 65, of St. Louis, MO. was called home on Feb 2, 2021 with her two daughters by her side, and will be dearly missed by her family. She will be remembered for her huge and beautiful smile and ornery self. We are deeply saddened to have lost her due to complications of Covid19, but we take comfort in knowing that she is free from pain and that we will see her again one day. Vickie was born in St. Louis, MO. on June 4, 1955 around the time she was in 5th grade she moved to the city of Kirkwood, where she eventually completed a couple years of high school. When she was older, she moved to Maplewood and then finally came back to the city. She became a mom to her first daughter in 1975 (more about that soon). Then, on July 15, 1977, she married Andrew Hoffelder in Fenton, MO. and they later also had a daughter. As some may know, she struggled with seizures as a young child and the treatments she received resulted in her having developmental and cognitive delays. In addition, she had a life-long battle with mental health issues. That being said, she was always a happy child and seemed to find joy even in the midst of some very difficult things that life seemed to keep throwing her way (including being hospitalized for her inability to care for her children, which has to be just about the hardest thing for any mother to endure). Her happiest days were always the ones when her niece or others would call or even better, visit. But her greatest joy was reconnecting with her two daughters later in her life (with a close second being her love of chocolate candy bars and Diet Pepsi)! She is survived by her niece Christina Jones, her daughters Joanna (Steve) Garcia and April (Frank) Balven, her sister Phyllis (Lee) Miesner, Aunt Norma (Benjamin?) Tatum, grandchildren Ryan and Dakotah Guithues, Steven and Rebecca Garcia, her cousin Tine (Keith) Nelson along with many other family and friends. Vickie was preceded in death by her mother Virginia (nee Hale) Bement and father Robert Russel Chronister, her sister Doris Bement, her brother Floyd Gene Bement, her sister Brenda (nee Chronister) Taylor. The Celebration of Life for Vickie will be on Saturday, March 13 at 1:30pm at O’Fallon Christian Church in O’Fallon, MO. In lieu of flowers, memorial donations can be made to the Epilepsy Foundation of Missouri and Kansas, 4406 St. Vincent, St. Louis, MO 63119 or donate online by following this link: https://efmk.org/give.

Vickie Hoffelder, 65, of St. Louis, MO. was called home on Feb 2, 2021 with her two daughters by her side, and will be dearly missed by her family. She will be remembered for her huge and beautiful smile and ornery self. We are deeply saddened... View Obituary & Service Information

The family of Vicki HOFFELDER created this Life Tributes page to make it easy to share your memories.