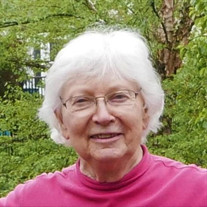 Veronica (Ronnie) Catherine Fix, age 85, of St Peters, Missouri passed away on May 9, 2022. She was born in Trenton, Illinois on October 13, 1936 to Herman and Anna Mueller (nee Markus). Ronnie was the beloved wife of Kenneth Fix, Sr. for 65 years. She was a loving mother to Karen Fix, Nancy Hooper-Roe (Mike), Joyce Hill, Kenneth Fix, Jr. She was a loving Grandmother to Kyle Hill, Julianne (Cody) Allen, Patrick (Jaimie) Hooper, Colleen (Beau) Besancenez, Lucas Fix and Courtney Fix. Great grandmother to Max Allen, Maeve Besancenez, Thomas Hooper, and two more great grand-children expected in July. She is pre-deceased by her daughter, Shirley Fix. Ronnie grew up on an Illinois farm then, after high school, moved to St. Louis where she met and married Ken on a blind date. Her first plane ride was to relocate to Germany in the 1960s for Ken’s job – this while 8 months pregnant, on crutches with a sprained ankle, with 4 daughters under the age of 6 in tow. It was a testament to her strong spirit and ability to handle anything that came her way. The family of seven lived there off and on over the course of 10 years, where they enjoyed traveling throughout Europe and continued to do so when they returned to the US. She kept detailed diaries of their travels and they liked to return to favorite places. Ronnie was a great cook (especially with homemade soups!) and seamstress. She enjoyed gardening and birds and could identify them all if you asked. She was patient and kind and was always there to help family or friends. Ronnie is survived by her sisters, Ivy (Lawrence) Hall, and Rita (John) Boulden and many nieces and nephews. She will be dearly missed by a host of other family members and friends. She was preceded in death by; Father, Herman Ferdinand Mueller; Mother, Anna Mueller; Brothers: Marcellus (Isabelle) Mueller, Ardwin (Inez) Mueller, Louis (Marilyn) Mueller; Sisters: Alice (Leonard) Daiber; Evelyn (Bernard) Luebbert. Visitation and Mass will be held at St. Joseph’s Church, 1355 Motherhead Road, St. Charles (Cottleville), MO on 5/31/2022 at 10:00am followed by lunch in the parish hall. In lieu of flowers please make any memorial contributions to the Salvation Army or a charity of your choice.

Veronica (Ronnie) Catherine Fix, age 85, of St Peters, Missouri passed away on May 9, 2022. She was born in Trenton, Illinois on October 13, 1936 to Herman and Anna Mueller (nee Markus). Ronnie was the beloved wife of Kenneth Fix, Sr. for... View Obituary & Service Information

The family of Veronica Catherine FIX created this Life Tributes page to make it easy to share your memories.