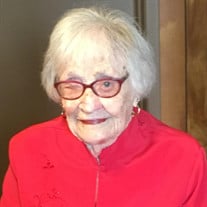 Velma Ruth Riley, age 101, of Sullivan, Missouri passed away May 19, 2021 at Villages of St. Peters, St. Peters, Missouri. Velma was born on July 4, 1919 in West Frankfort, Illinois, the daughter of Lewis J and Irene Molly (Boettinger) Benson. She grew up in Rock Hill, Missouri and later her parents owned and operated Benson’s motel, restaurant and gas station on route 66 in Stanton, Missouri. She was united in marriage to Lyman Guyton Riley on February 23, 1939 and they made their home at Meramec Caverns in Stanton where Lyman was cave manager. In 1953 they moved to Onondaga Cave in Leasburg, Missouri where they owned and operated the cave until 1967. During many of those years Velma taught Sunday school classes and loved her work with the Cub Scouts. Velma was always active in many aspects of her life. She loved ice-skating on River Des Pere in St. Louis while growing up and later played the accordion and piano. She also became an avid hunter and fisherman. Velma enjoyed knitting, crochet, making Christmas ornaments, beadwork, and playing card games with friends. She was especially proud of the gold medals she won in line dancing competition while in her 90’s. Most of all, Velma loved her family and enjoyed spending time with her two daughters, sons-in-law, grand children and great-grandchildren. She will be greatly missed by her family and many friends. A special thank you to Chleo Alexander, Joan Mathews and Jim Minx of Sullivan for years of Wednesday night card parties and chauffeuring Velma after she relinquished her drivers license. Velma is survived by her children, Pat Wallis and husband Bob of Weldon Spring, Mo., Linda Lloyd and husband Rodney of Golden, Co.; grand children Kevin Wallis and wife Susan of Weldon Spring, Mo., Keith Wallis of Weldon Spring, Mo., Kent Wallis and Stacy Taylor of Leasburg, Mo., Leanne Merves and husband Stuart of Wentzville, Mo., Shannan Steele of Wheat Ridge, Co., Gabe Steele and wife Kristi of Golden, Co.; Step grandchildren Rodney Lloyd Jr. and wife Beth of Fenton, Michigan, Heather Steele of Denver, Co., Chad Steele of Avon, Co.; Great-grandchildren Keith Wallis Jr. and wife Rachel, Cody Wallis, Zachary Merves, Zane Steele, Riley and Darby Bearss.; Step great-grandchildren Max, Jack and Anna Lloyd.; Great-great granddaughter Brooklyn Wallis. She was preceded in death by her husband Lyman in 1990, parents Lewis and Irene Benson, and her sister, Roselyn Kroenlein. In respect of Velma’s final wishes, she will be cremated and there will be an intimate memorial for the family.

The family of Velma Ruth RILEY created this Life Tributes page to make it easy to share your memories.