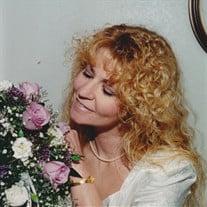 Traci Lynn Hobson Williams, age 57, passed away on December 16, 2022. Traci was born at North Kansas City, MO hospital on September 25th, 1964, to Gary Hobson and Pamela Hobson. She graduated from North Kansas City, MO high school in 1984 and had Anthony (Tony) Hobson on January 4th, 1984. She was saved in the name of Jesus and a born-again Christian. She moved to Saint Louis, MO in 1990 when she was 25. She worked at John Hancock Insurance and a few other insurance companies along the way. She met her husband Michael Williams when she was 33 and said it was love at first sight. They were married 3 months later February 14th, 1997–Valentine’s Day in Las Vegas, NV. They worked hard to build and grow their business and played on the weekends away on their motorcycle. When Traci was 37 and Tony was 18, she found out she and Michael were going to have a baby. Brandon Williams was born on June 7th, 2002. A year and a half later, they found themselves expecting another baby. Her third son, Jesse Williams, was born on May 11th, 2004. She was 39 at the time. In her final years, she spent a decade and a half working as an optical technician at Walmart’s Vision Center department. She made very close friends of her coworkers over the years, especially Jenny and Jennifer, who brought as much light into her life as her family. She loved to laugh and collect all manner of pretty rocks and butterflies. She loved her family, her kids, more than anything else. She was proud to be a wife and mother to them. She was preceded in death by her mother, her father, and her first-born son. She left behind her husband of 24 years Michael Williams and their two sons Brandon Williams and Jesse Williams, as well as her sister Carla Appleberry and niece Randi Appleberry, a very close stepmother Vicki Hobson and stepsister Tamara Pelkey, her grandmother Freda Hobson and multiple aunts and cousins. They will all miss her very much and think of her often. The light that Traci brought to the world will never be forgotten. A Celebration of life is being held Monday January 31, 2022 from noon until two pm with a service at two p.m. at Alternative Funeral & Cremation Services.

The family of Traci Lynn HOBSON-WILLIAMS created this Life Tributes page to make it easy to share your memories.