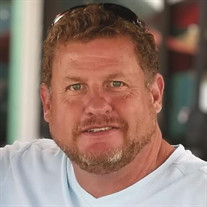 Thomas Joseph Fihe, age 54, of St. Louis, MO, passed away peacefully at home on July 15, 2021, among many families and friends. He recognized all our presence and fought through his last hours after suffering from a rare adrenal gland cancer over the past two years. Thomas was born June 7, 1967, in Huntington, IN. and was preceded in death by his father Richard Fihe, stepfather Norman (Smitty) Smith, and stepfather William Whitehall. He is survived by his mother Lois Bohlander Whitehall, wife Rebecca Heath, ex-wife Laura Gallaher, brother Richard (Andrea) Fihe, half-sisters; Erica (Kurt) Bruton and Laurie (Jon) Walls. Also survived by stepsisters Vicki (Ron) Keulker, Kelly Smith, Patti (Bob) Rubin, and Tracey Smith Bissonett. In addition, survived by stepbrothers Larry (Li Ping) Whitehall, Jeff (Sharon) Whitehall and stepsister Angie Whitehall, along with many other very close cousins, nieces, and nephews. Thomas loved life and cherished spending time with family and friends. He was always the life of a party with a lively personality and strong opinions. His passion was being in the water, swimming in the ocean, and a deep fascination of sharks. As much as he wanted, he never managed to grow gills. Thomas always seemed to know what he wanted. At an early age he wanted to be a marine biologist, instead set his mind on becoming a Scuba Diving Instructor, as the youngest graduate from PADI International College of Scuba Diving. After several years as a Master Dive Instructor, he decided to attend Maryville University to get his bachelor’s degree in Business before starting a very successful career in pharmaceutical and medical sales. He spent his last years working with great friends at Country Acres Pet Resort and spending time with his dog Kai. A Celebration of Life at Creve Coeur Lakehouse Bar & Grill on Saturday, August 7, 2021 from 12:00 - 4:00 pm. In lieu of flowers, please donate to Wildlife Collections or Saving Blue.

Thomas Joseph Fihe, age 54, of St. Louis, MO, passed away peacefully at home on July 15, 2021, among many families and friends. He recognized all our presence and fought through his last hours after suffering from a rare adrenal gland cancer... View Obituary & Service Information

The family of Thomas Joseph FIHE created this Life Tributes page to make it easy to share your memories.