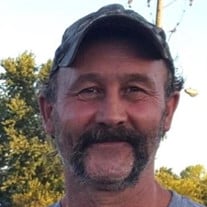 Tom “Boogie” Borgmeyer, 53, passed from this life unexpectedly on January 10, 2021. He leaves behind family who love him dearly, and many loyal and lifelong friends. We will miss him every day, and we look forward to the day when we will hear his laughter again. Tom was born in St. Charles, Missouri on July 24, 1967 to Anna Mae (Mosher) and Kenneth Borgmeyer. He was the youngest, after his sister, Barbara and brother, Brian. He attended Borromeo School and was a Class of ’85 graduate of Duchesne Catholic High School. He worked at Wiegman’s service station and Ermeling’s garage before working for many years at Hackmann Lumber, alongside his dad “Porkey”. Tom loaded trucks and drove building materials to construction sites. He was self-employed for many years operating a tree service and selling firewood. Tom loved the outdoors and spent lots of time hunting, fishing, four-wheeling, gathering morels, and picking up antler sheds. He bought a home in Orchard Farm and has spent many years renovating it. The antlers he has collected over the years are the best conversation pieces in his home, and a reflection of what he enjoys and loves. Tom’s house has provided a place for his dad to garden, and the gardens have produced vegetables lasting all winter, with plenty to share. At his annual pig roast, usually in July, Tom welcomed his family and friends for live music, good food and drink, and great memories. For his birthday, he gave a party for his friends. He and his sister Barb had a special relationship, and Tom was always looking for a chance to tease her and jerk her chain. He loved a good prank, and enjoyed quoting funny movie lines in character, always making Barb roll her eyes and laugh. We have many memories of Tom impersonating characters from Saturday Night Live and Monthy Python. The kids loved his storytelling, even when they were too young to understand what he was talking about. Tom had some good dogs over the years, but the dog that the whole family bonded with was a yellow lab, Murphy. She was a great companion for him, and his heart was broken when it was Murphy’s time. He was a very proud uncle to his niece and nephew, Lucy and Ben. He entertained them by watching funny videos which made him laugh uncontrollably. A special memory was the Christmas that they created an “Elf Yourself” Jib Jab video which made Tom laugh hysterically, to the point of tears. He is also the great-uncle of three little ones, and we will be sure they hear many stories about him as they grow up. Lucy especially remembers a hunting trip with her dad and Uncle Tom, when she learned firsthand his knowledge of nature and ability to pick up on signs of animals (even after sustaining some hearing loss.) Over the years Tom created several original gifts to commemorate special occasions. Each one was a unique piece, often incorporating photos and objects that would bring back memories. For weddings, anniversaries, retirements, new homes, and birthdays, he designed framed pieces that became keepsakes. A real fashion guru, he was known to own a piece of clothing for many years before removing it from service. It’s been said that Boogie knows everyone, and has never met a stranger. He was a generous friend, too, who would give the shirt off his back – but it would not likely be in any condition to wear. Tom is survived by his dad, Ken Borgmeyer, his brother Brian and sister-in-law Tracy, nephew Ben Borgmeyer, niece Lucy Wear and her husband Mitch, and great-nephew and nieces, Michael, Clara, and Gianna. He was preceded in death by his sister Barbara Ann and mother Anna Mae. A Celebration of Tom’s life will be scheduled at a later date. The Borgmeyer Family wishes to thank Tom’s close friends, who were a blessing in his life, who were always there for him and looked out for him. Your kindness will never be forgotten.

Tom &#8220;Boogie&#8221; Borgmeyer, 53, passed from this life unexpectedly on January 10, 2021. He leaves behind family who love him dearly, and many loyal and lifelong friends. We will miss him every day, and we look forward to the day when... View Obituary & Service Information

The family of Thomas Edward BORGMEYER created this Life Tributes page to make it easy to share your memories.