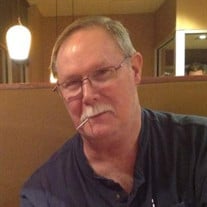 Thomas Edward Adams passed at 4:16 p.m. on Sunday, January 17, 2021 in his home at the age of 67. Tom was born in St. Louis Missouri on March 3, 1953 to loving parents Betty Lee Bauer and Leonard Theodore Blust, who preceded him in death, along with his Step-Father, Guy Robert Adams. Tom is survived by: His partner in life, wife and friend, Barbara Lee Adams and their boys Mark Thomas Adams and Jeffrey David Adams and his wife, Cory Adams. He was a fun-loving friend and life teacher to his grandkids, Tayler Marie Rose and Logan Thomas Adams. His siblings: Dear sister Diana Mohan, her husband Dennis Mohan and uncle to their daughter, Maureen Mohan; Loving brother Robert Adams, his wife Linda Adams and his nephews, their sons Bryan Adams and Joseph Adams; and his loving brother David L Adams, wife Nancy L Adams and nephews, their sons Michael D Adams and Patrick T Adams. Tom enjoyed many things in life, had a very strong work ethic and touched so many people in such positive ways through all walks of life that he will be missed by many. He was an avid outdoorsman for the majority of his life and, especially, had a strong passion for fishing. His boyhood friends and he took as many fishing trips as they could work into their schedules over the years. He instilled these same passions in his sons and many other young boys as he served as Scout Master for Boy Scout Troop 283. During this time, he touched countless lives and built relationships that lasted to the end of his life. He was also a passionate bowler and served as one of his league’s Secretary for over 20 years. Tom worked for Monsanto/Solutia/Eastman for his 37-year professional career. He was hired as an accountant and traveled the world with the company. Eventually, his love of, and talent with, computers made him a valuable asset to the company when he designed and maintained accounting systems. Upon retiring, Tom, Barb, Mark and sister-in-law, Bev Bowman, were able to take some epic road trips. East to Gettysburg, Philadelphia, Virginia and Atlantic City. West to Mount Rushmore, Devil’s Tower and the Badlands. Further west to Colorado, Las Vegas, The Grand Canyon and Roswell, NM. North to Toledo, Detroit and Mackinac Island. Further north to Milwaukee, Minneapolis, the head waters of the Mississippi River and Winnipeg Canada. Each trip was more driving than he wanted to do, but he enjoyed them and visited almost every US state in the end. Pokemon Go became a big part of Tom’s life over his last few years as it gave him the opportunity to create even more memories with his wife, children and grandchildren. Everybody in the family played and he always looked forward to meeting up with friends, new and old, who enjoyed the game and would spend the afternoon walking or driving around to catch them all. You may make a contribution to the “Tom Adams Memorial Fund” in lieu of flowers should you choose to send something to his family. Money contributed to the fund will be used to create a memorial bench at Creve Coeur park in Tom’s memory. You may contact Barb or her sons, Jeff or Mark for details on the memorial and how to contribute if you desire. A celebration of Tom's life will be scheduled in the near future as restrictions on gatherings due to COVID are lifted.

Thomas Edward Adams passed at 4:16 p.m. on Sunday, January 17, 2021 in his home at the age of 67. Tom was born in St. Louis Missouri on March 3, 1953 to loving parents Betty Lee Bauer and Leonard Theodore Blust, who preceded him in death, along... View Obituary & Service Information

The family of Thomas Edward ADAMS created this Life Tributes page to make it easy to share your memories.