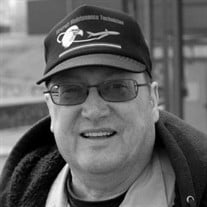 Stephen Charles Wagoner was called home to God on Sunday, September 6, 2020 after a five year battle with cancer, passing away in his sleep while at home with his loving wife. He was preceded in death by his father Norman Charles and mother June Catherine Wagoner (nee Sheeran) He is survived by his wife of 34 years Inson “Sonny” Wagoner, sons Samuel (Traci), James, and Timothy, his grandchildren, Brenna, Connor, and Marshall, brothers Mark (Mary Jo) and Scott (Emily), and sisters Gale and Tammy. Steve was born and raised in the St. Louis metro area and graduated from Riverview Gardens Senior High School in 1970. Later that year he joined the United States Air Force where he served Honorably for 20 years as an Aircraft Electrician and retired in 1990. His long military career took Steve all over the world with duty stations in Thailand, Guam, Germany, England, Turkey, and several duty stations in the United States and he proudly served his country during Vietnam. After his military career, he continued his work as an Aircraft Electrician working for TWA, American Airlines, Trans States and several others. His last job had him living in Korea for close to 9 years total. He loved being overseas with his wife and mentioned that some of the best bike rides he has ever taken were in Korea. He loved the St. Louis Cardinals, riding his bike, classic TV shows and roller coasters. These passions were passed onto his children who enjoyed sharing these activities with him. He will be missed by so many-his wife, sons, brothers and sisters, grandchildren, nephews, nieces, aunts, uncles, cousins, coworkers and friends. There will be a Memorial service on Thursday, September 17, 2020 at 1:00 PM at Chapel of the Cross, 907 Jungermann Road, #3094, St. Peters, MO, 63376. Doors will open at 12:00 PM for visitation and greeting. There will be a graveside service at Jefferson Barracks National Cemetery on Friday, September 18, 2020 at 9:30 AM. Those wishing to honor Stephen's memory may make memorial donations to either Southern Illinois Jesus Baptist Church, 4 Phillips Drive, Fairview Heights, IL., 62208, 618-213-6755 or Honor Flight by visiting https://www.honorflight.org/

Stephen Charles Wagoner was called home to God on Sunday, September 6, 2020 after a five year battle with cancer, passing away in his sleep while at home with his loving wife. He was preceded in death by his father Norman Charles and mother... View Obituary & Service Information

The family of Stephen Charles WAGONER created this Life Tributes page to make it easy to share your memories.