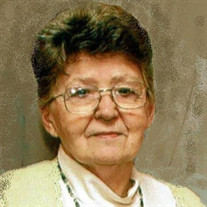 Shirley Mae Bryan (nee Pennock) passed away peacefully on August 16, 2019. Born on November 4, 1933 to Lawrence and Mildred (Miller) Pennock, she grew up in the Bourbon, MO area and spent her adult life in the St. Louis and St. Charles County areas. She had two sisters, Beverly Land, and the late Delores Williams, and one brother, Duane Pennock. On September 3, 1955 she married Roy T. Bryan in Steelville, MO. They raised three children: Becky (James) Bubenik, Jeffrey (Sandy) Bryan and Skip Bryan. Shirley had five grandchildren and nine great-grandchildren. She was also the honorary matriarch of the Carlos and Christina Garcia family. Though Shirley dropped out of school at age 16 to marry, she later earned her GED and completed some college courses in accounting. She worked for many years as a bookkeeper and especially enjoyed payroll work, the more complicated the better. Shirley was intrepid and resilient. When presented with a challenge, she found a solution. She devoted a lot of her life to guiding her family, including helping her youngest son deal with the obstacles of a serious disability. She was a good planner who tried to make the best of the most difficult situations. She loved to read, especially mysteries. An excellent seamstress, she made most of daughter’s dresses for many years, including a wedding dress. In the past year while recovering from the effects of a stroke, Shirley took up embroidery again, thoroughly enjoying the opportunity to be creative. She also kept her mind sharp by reading the Post-Dispatch every day, writing letters to the editor, doing sudoku puzzles, and watching a lot of news programming. A staunch Democrat, her goal since her stroke was to live to see Donald Trump voted out of office. She didn’t quite make it, but she undoubtedly laughed when we wrote that donations could be made to the Democratic National Committee (democrats.org) because she knows that some of her family members will be upset by this choice. The current political situation, however, disturbed her a lot, and she was agitated about the damage she believed some Republicans are doing to the country. Her family will host an open house celebration of her life on Saturday, August 24 from 1 p.m. – 5 p.m. at Shirley's home. Shirley really enjoyed relaxed social gatherings, so that’s what this will be. She always said she’d like us all to gather together and tell funny stories about things she said or describe an event that really showed who Shirley was. This was a woman who hung up on the Secret Service, so there are certainly stories to tell. Please type any memories that come to mind on an 8 ½ x 11 sheet, and we’ll compile them in a memory album. If you’d like to send your remembrance in a digital form, we can put them all together and share with everyone – a true picture of who Shirley was.

Shirley Mae Bryan (nee Pennock) passed away peacefully on August 16, 2019. Born on November 4, 1933 to Lawrence and Mildred (Miller) Pennock, she grew up in the Bourbon, MO area and spent her adult life in the St. Louis and St. Charles County... View Obituary & Service Information

The family of Shirley Mae BRYAN created this Life Tributes page to make it easy to share your memories.