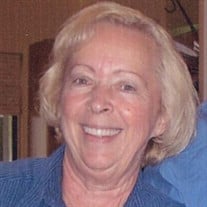 Sheila Ann Dewberry-Tuller (nee Denner) June 24, 1947 – January 19, 2021 Born June 24, 1947 and raised in St. Louis MO, she was the only daughter of Julie and Gene Denner. Sheila was an active member of the Walther League at Elim Lutheran Church where her mother Julie Denner was the youth group leader. She made many close and lifelong friends while attending school and church. Just to name a few: Linda (Kramer) Peters of Center, Missouri Claudette (Mungle) and John Snelson of St Charles, Missouri Phil Wicks of St Charles, Missouri and so many more. Sheila graduated from Berkeley High School in 1965 then went on to study at the University of Missouri St. Louis. (UMSL) She worked at EJ Korvett’s as the cosmetic manager for many years it was there, she met James Lynn Dewberry (Jim). Sheila and Jim were married on May 21, 1972 at Elim Lutheran Church in Berkeley, MO. During their marriage they had one son, Jason Brent Dewberry. Jason was born on April 29, 1974. In 1981, Sheila, Jim and Jason moved to Jupiter, FL where Sheila began working in golf course administration. James (Jim) Lynn Dewberry passed away on April 13, 1987. Sheila worked for over 15 years as the Administrative Manager at North Palm Beach Country Club in North Palm Beach, FL. It was there she met Jim Tuller, who was the golf pro at the time and they fell in love and married on November 27th, 1998 in Beloit, Wisconsin where Jim Tuller was born and raised. They maintained homes in Florida and Wisconsin and loved to travel in RVs back and forth with the changing of the seasons, and explored many parts of the country together during their 23 years of marriage and partnership. They continued their management of golf courses, running the golf course and restaurant at Krueger-Haskell Golf Course in Beloit, where both Sheila and Jim were very popular and loved members of the community, always quick to share a smile and a laugh with the golfers and customers they served, they donated their time and money to programs that helped at-risk youth in their community to learn skills and develop friendships, through the game of golf. Sheila’s son Jason blessed her with two sons, Bryce and Parker and a beautiful daughter Rowyn. Jim also had children; daughter Jennifer, son Jeff, and 4 grandchildren that they spent time with frequently in Florida. Sheila had an infectious laugh and a servant’s heart. She was passionate about her faith, her church, her community and her family. Her no-nonsense Midwestern sensibilities came through in her steady, calm resolve and a tireless work ethic. She lost a year and a half battle to an aggressive form of leukemia on January 19, 2021 during the peak of the pandemic at a time where it was very difficult to organize a memorial service. She was survived at the time by her mother Julia who was 103, her husband Jim, her son Jason, step kids and 7 grandchildren. Sheila’s mom Julie Denner, passed away on Saturday, Feb 5th, 2022 at the age of 104. They will both be deeply missed and always remembered.

The family of Sheila Ann DEWBERRY-TULLER created this Life Tributes page to make it easy to share your memories.