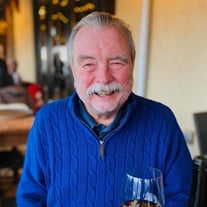 Roy W. Partridge gained his wings and captained his final flight on April 4, 2021, at the age of 72 years. A native of Duluth, MN, Roy attended the University of Minnesota, and graduated with a degree in Aeronautical Engineering. Upon graduation he became a proud member of the United States Air Force where he attended officer training school in San Antonio, TX, followed by pilot training in Enid, OK. Roy was stationed at Scott Air Force Base in Belleville, IL, where he met the love of his life, Linda. Roy & Linda were married the following year in Salina, KS. This year would have marked their 48th year of blissful wedlock. Roy celebrated 29+ years in the Air Force before his retirement as Colonel Partridge. In 1978, he began his career as a commercial airline pilot with Ozark Airlines (later TWA and eventually American Airlines). He flew commercially until his retirement at the age of 60. Roy continued his education and received a Master’s of Computer Science from Concordia University in 2000. He also completed all of his coursework towards his Ph.D. in Engineering Management from the University of Missouri-Rolla. He is survived by his wife of 47 years, Linda (nee Selm), daughter Karen Sifford (Matt), son Matt (Maria), daughter Laura Rauscher (Darren), and his nine grandchildren: Talyn, Alex, Mackenzie, Ryland, Lachlyn, Kavan, Brogan, Kadyn, & Monaghyn. Roy lived retirement life to the fullest. Aside from perfecting his cooking skills, Roy became the king of naps and mastered infomercial shopping. He also took numerous vacations with family and friends. Wednesday nights were devoted to “pizza night” with immediate family where stories and dad jokes were plentiful. Roy also logged numerous hours of babysitting his grandkids under his belt, which he considered his greatest joy. There will be a Celebration of Roy’s life on Sunday, May 16, 2021 at Defiance Ridge Vineyards from 10:00 AM - 2:00 PM, so we can all raise a toast to this amazing man.

Roy W. Partridge gained his wings and captained his final flight on April 4, 2021, at the age of 72 years. A native of Duluth, MN, Roy attended the University of Minnesota, and graduated with a degree in Aeronautical Engineering. Upon graduation... View Obituary & Service Information

The family of Roy Wilbert PARTRIDGE created this Life Tributes page to make it easy to share your memories.