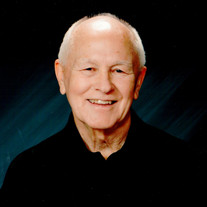 Roy Thomas Bryan passed away peacefully on November 7, 2021 at his home at age 88. Born in Leasburg, Missouri on December 28, 1932, Roy had 12 siblings and is survived by three sisters: Velma Allison of Cuba, Norma Sappington of St. Peters, and Georgia Bryan of St. James. He and all of his brothers served in the military. Roy was in the Army from 1953 – 1955, serving in Japan during the Korean War. He received a sharp shooting award during training but was assigned to work in a hospital as a typist. When Roy left the military, he married Shirley Mae Pennock. Friends say he had been crazy about her as far back as eighth grade. She died just 18 days short of their 64th anniversary, in 2019. Roy is survived by three children: Becky (James) Bubenik of Bridgeton, Jeffrey (Sandy) Bryan of St. Peters, and Skip Bryan of St. Charles. He is also survived by the Carlos Garcia family of St. Charles, long-time friends. Roy spent most of his working years in the tool crib at McDonnell Douglas, which became Boeing shortly before his retirement. For many years he worked the second shift, arriving home after midnight, but he accepted a promotion to manager of the tool crib and worked the day shift for a few years before he retired in 1995 after 33 years of employment. Roy was a very even-tempered man and had a lot of friends at work. He enjoyed monthly lunches with the other retirees for many years. Roy and his family lived in the Bridgeton and St. Charles area most of the time, but in the early 70’s he built a home in Bourbon, Missouri. He did most of the work himself, commuting to St. Louis for work every afternoon. After a few years the long commute and upkeep on the property became too much and the family moved back to Bridgeton. A hard-working, talented man, Roy moonlighted for many years as a handyman, often working with his good friend Bobby Aday. The two of them could repair anything around a house. Throughout his life, Roy LOVED sports. He was a fastpitch softball pitcher in both high school and the army. He was an avid Cardinals, Blues, and Mizzou fan, watching or listening to every game he could. In the 1970’s he once attended a Blues game during a blizzard that kept most people at home; there were so few spectators that the concessions were free that night. He knew the rules, the players, and the strategies needed to win a game. Those who watched a game with him learned a lot. He also enjoyed watching horse racing, Nascar, and the Tour de France. Bowling was the sport that Roy played into his 80’s. He bowled on numerous leagues in the St. Charles area and won two Saint Charles Golden Games medals. His highest score in league play was 275. Roy was an open, honest person who made friends everywhere he went, the pharmacy, grocery store, etc. And he had a good sense of humor. Most recently when a nurse at the hospital asked for his birthdate, he said, “There you go. Another young woman trying to find out how old I am.” He will be sorely missed by his children, grandchildren, great grandchildren and all who knew him. A memorial service will be held on Saturday, November 20th from 2 p.m. to 5 p.m. in Tubby's Pub & Grub's event room at the Plaza Bowling Center, 506 Droste Road, St. Charles, MO 63301.

Roy Thomas Bryan passed away peacefully on November 7, 2021 at his home at age 88. Born in Leasburg, Missouri on December 28, 1932, Roy had 12 siblings and is survived by three sisters: Velma Allison of Cuba, Norma Sappington of St. Peters,... View Obituary & Service Information

The family of Roy Thomas BRYAN created this Life Tributes page to make it easy to share your memories.

Roy Thomas Bryan passed away peacefully on November 7, 2021 at...