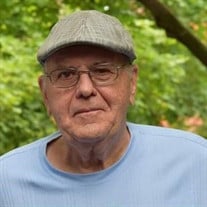 Heuer, Robert (Bob) St. Charles – Robert “Bob” Heuer, 77, lost his battle with uveal melanoma on December 4th at Barnes St. Peters Hospital. Bob is survived by his wife of 55 years, Rose (Tivoli) Heuer, his daughter Robin Yuede and her husband Randy Yuede, and his daughter, Kim Heuer. He leaves his three grandchildren; Danielle, Nicole, and Carson Yuede for whom he was an outstanding role model. He also leaves behind numerous “nieces and nephews” and too many close friends to mention. Born in Walnut Park, the son of Robert and Harriet Heuer, he lived in Jennings before moving to St. Charles, MO. Bob graduated from Beaumont High School. He was a card-carrying member of Locals 36 and 268, Sheet Metal Workers Union. Bob was a coach, Scout leader, and a mentor to numerous youth through the Athletic Association of Corpus Christie Parish. Later in life, he was active in the Knights of Columbus and St. Cletus Catholic Church. He retired from Shell Oil/Conoco Phillips. After he retired, he worked part-time at Busch Stadium and Kim’s Garage. Bob was proud of both his daughters. He loved nothing more than watching Robin coach Howell North volleyball or Kim playing on Monday nights. Bob loved tailgating before baseball/football games with family and friends. He loved hunting and fishing whenever he got the chance. He never knew a stranger nor arrived late for a meeting. He always lent a helping hand, and was truly a jack-of-all-trades. His two favorite places were sitting in Kim’s garage drinking a Miller Lite or finishing a project in his basement workshop. Funeral Service – December 11, 9-10 am visitation and viewing at St. Cletus Catholic Church in St. Charles, MO. 10:00 mass immediately following visitation (St. Cletus Catholic Church). In lieu of flowers, contributions may be made to St. Cletus St. Vincent De Paul.

The family of Robert Louis HEUER created this Life Tributes page to make it easy to share your memories.