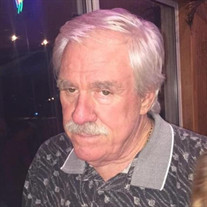 Robert “Bob” Colburn, age 73, passed away peacefully on January 22, 2021 surrounded by family. He was born October 24, 1947 to Andrew F. Colburn and Lidia F. (Spell) Colburn in Saint Louis County. Bob dedicated 29 years (retired) of his life to the St. Louis County Police Department after serving as a Sergeant in the United States Air Force. His involvement in law enforcement continued by serving on the Advisory Board of the Laborers’ Local 42 Law Enforcement Division, in an effort to support current and future officers. Bob was a proud father and grandfather. He treasured each moment he got to spend with his family. The joy his grandkids brought him could not be matched. His evenings and weekends were spent watching his grandkids play sports that they love, or simply acting as a listening ear. He enjoyed teaching them new tips and tricks and was a huge part of who they are today. When Bob was not spending his time buying his grandchildren ice cream or lunch, you could find him hunting, fishing, or being outside with his crew. He valued each friendship he made along the way. He had a gift of telling stories, making people laugh, creating new memories and friends everywhere he went. Bob is preceded in death by his parents. He is survived by his beloved dog Macy, son Rick (Christy) Colburn, daughter Christina D’Angelo; sisters Billie Held, Lea (Leo) Pearia and Debbie Hinton; six grandchildren Jessica, Ben, Nicole, Kiley, Kaitlyn, and Kamryn; four great-grandchildren Caydynce, Mason, Madison, and Savannah. He is also survived by many Nieces, Nephews, other extended family members and Friends. Bob’s family appreciates the love and support from his friends and colleagues in the past few weeks and over the years. A future celebration of life will be held in his honor in the Spring. Join us in celebrating the life of Robert Colburn. A gathering will be hosted by Bob's family on June 19th from 3pm to 11pm. There will be food, drinks, and live music. Stop by for a little, or stay awhile.

The family of Robert Allen COLBURN created this Life Tributes page to make it easy to share your memories.