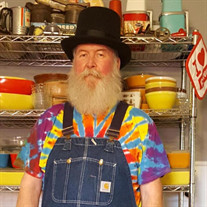 Robert (Buz) Carter, 69, of St. Charles, MO., passed away unexpectedly at home on Monday, February 22, 2021. His family and friends are devastated and heartbroken. On October 25, 1951 the world was blessed with Buz by Willis James Carter and Nora Grace Carter (nee Smith) in St. Louis, MO. He is proceeded in death by Willis and Nora Carter, his brother Jim Carter and his daughter Cynthianna Indiana Carter. He is survived by his sister Shirley Gray (nee Carter) his brother Bill Carter, and his 5 children, Robert (Bobby) Wayne O'Neal, Thomas (Tommy) Leon O'Neal, Suzannah Montana Brown (nee Carter), Austin Texas Carter, and Sierrah Nevada Carter. He had 7 grandchildren, Kyle O'Neal, Alycia O'Neal, Riley O'Neal, Donovan O'Neal, Natalie O'Neal, Landon O'Neall, and Jackson O'Neall. He also leaves behind his longest love and guardian angel, Laurie Willman. Buz lived a very big life. He was a legend. He made so many friends in his lifetime. Everyone that knew him knew he was a special guy. His laugh was contagious and he took every opportunity to say something funny or tell a joke. He was incredibly intelligent and was the king of trivia. He was so compassionate for the less fortunate and reminded us frequently to have a heart for those people who had less. He was a masterful truck driver with over 50 years under his belt. He was a loyal employee and was always a friend to his bosses. He won many awards for his millions of miles that he drove in his truck and proudly displayed them in his living room. He had traveled to so many different places throughout the United States and had visited his beloved England several times to see his British cousins. One of his favorite hobbies was going “junkin” as he called it, to find his favorite collectables, mostly Pyrex, creating a sizable collection of which he was very proud. We can't wait till we can be with you again, Buzzy Carter. You'll be in our hearts forever. Due to the current circumstances no memorial will be held at this time. We will be celebrating Buz's life on October 24th, the day before his 70th birthday in J.C. Park in St. Charles. In lieu of flowers, for those wishing to honor Buz's memory, you can make a donation to http://themiracleproject.org/ by clicking on the donation button.

Robert (Buz) Carter, 69, of St. Charles, MO., passed away unexpectedly at home on Monday, February 22, 2021. His family and friends are devastated and heartbroken. On October 25, 1951 the world was blessed with Buz by Willis James Carter and... View Obituary & Service Information

The family of Robert Walter CARTER created this Life Tributes page to make it easy to share your memories.