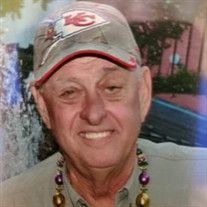 Robert Paul Rogliardi, known to all as Bob, of St. Louis, MO departed this life at home on Tuesday, November 24, 2020 having reached the age of 75 years, two months and 17 days. He was born in St. Louis on September 7, 1945. Bob was the son of Paul Eric Rogliardi and Irene Emmerich Rogliardi. He grew up in St. Louis MO, attended Pattonville High School before enlisting in the Military. Bob was proud to have served his country by entering the US Army on July 1, 1964 and served full-time until June 16, 1967. While in the Army, he attended the US Army Transportation School in Fort Eustis, VA and studied Single-Engine Single-Rotor Helicopter Repair. After receiving his diploma from US Army Transportation School, he was deployed overseas where he spent just over two years stationed in Germany. After returning to the states, he re-enlisted in the US Army Reserves until his Honorable Discharge on May 31, 1970. In the Reserves, Bob had worked as an aircraft mechanic with McDonnell Douglas and had also completed the Airframe and Powerplant Mechanics Curriculum at Parks College of Aeronautical Technology in East St. Louis. After employment with McDonnell Douglas, he went on to work at Ozark Airlines, TWA and American Airlines until his retirement in 2006 (Total of 38 years with Ozark/TWA/AA). While in Europe he met his first wife, Irene Heid, whom he married November 23, 1967. This union was blessed with two children; Renee and Paul. Bob spent the next chapter of his life chasing kids, he never missed a school event or sporting event. He was a hard worker who supported his family. On January 29, 1993, Bob married Janet Leeds on a Wind Jammer off the coast of the US Virgin Islands. This was the beginning of many years of traveling, which has taken them across the country and the world. Friendships were made at every stop. Their trips to Alaska and Africa were the pinnacle of their travels. While on Safari in Africa, they were fortunate enough to hunt several trophy animals, which they have proudly displayed in their home. Bob loved the outdoors. Hunting, fishing, traveling and spending time at the lake were the hobbies he loved to do with his with family and friends. To Bob, there wasn’t anything better than the open breeze, a good cigar, a beer and conversation. He also enjoyed his time as a member of Elks Lodge #9 of St. Louis and his regular visits to his favorite local watering hole, Pirate’s Cove. The establishments gave him another means to enjoy time with others; telling jokes, stories and having a beer with good company. Bob was an amazing man who knew the importance of fellowship. After being diagnosed with cancer, he spent the final days of his life calling or visiting all who he considered near and dear. He thanked them for their friendship and let them know how important they were to him. He gave everyone an opportunity to say good-bye to him and say anything that needed to be said. Bob had a strength and courage of no other as he left nothing unsaid. He shed tears of joy each day when someone came to visit him. Bob is survived by his wife, Janet Rogliardi nee Leeds, of St. Louis, MO; his daughter Renee Rogliardi-Reed and husband Aaron of Wentzville, MO; his son Paul Rogliardi and wife Lynn of Ethlyn, MO; his step-daughter Jenni Ross and husband Ron of Arnold, MO; and his step-son Jason Peterson and wife Maria of Winnetka, CA; his first wife Irene Heid; his grandchildren Brett Rogliardi and wife Tiffany of Moscow Mills, MO; Seth Reed and Chloe Reed of Wentzville, MO; Allison Rogliardi and Avery Rogliardi of Ethlyn, MO; his step-grandchildren Kaitlyn Ross of Chicago, IL and Sam Ross of Arnold, MO; his great grandchildren Jayce Rogliardi, Ava Rogliardi and Lilly Rogliardi of Moscow Mills. In lieu of flowers, those wishing to honor Bob's life may make memorial donations to Brees Gift by visiting https://www.breesgift.com/ and selecting donate. Celebration of Life is pending.

Robert Paul Rogliardi, known to all as Bob, of St. Louis, MO departed this life at home on Tuesday, November 24, 2020 having reached the age of 75 years, two months and 17 days. He was born in St. Louis on September 7, 1945. Bob was the son... View Obituary & Service Information

The family of Robert "Bob" Paul ROGLIARDI created this Life Tributes page to make it easy to share your memories.

Robert Paul Rogliardi, known to all as Bob, of St. Louis, MO...