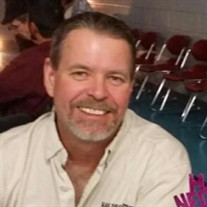 Robert Henry Baumhoff Jr died unexpectedly on Tuesday, April 07, 2020. He was born on September 20th, 1958 in St. Charles, Missouri. Born to Robert Henry Baumhoff Sr, and Stella Ruth Baumhoff (nee kitchens) and formally Usry. He was fifth born of six siblings; Jim Usry, Kaye Mayfield, and Lynne and Rick Baumhoff. He was preceded in death by his parents and his sister Patricia VanHooser. Loving husband to Diane Quirk-Lokey. Devoted father to Shelby Baumhoff and Brandi Baumhoff. Bonus father to Meghan Lokey and Michael Lokey. Proud dog dad to Jax. Retired Pipefitter from Local 562 Plumbers and Pipefitters Union of 36 years. Bob could always be seen with a twinkle in his eyes and a smile on his face, and you could always find him by the pizza or dessert table. He lost his way for several years but with the help of his N.A. family, his faith, and unwavering love for his family, he found his way back to himself and was stronger than ever. He was always there to lend a helping hand, a listening ear and an open heart. He took great pride in being a father and loved his daughters more than anything in the world. He had an unconditional, unmatched love for his wife that was visible just by the way he looked at her. He was the kind of friend everyone should have. Selfless, loyal, loving and reliable. If you called, he would be there. He was the kind of person everyone should get to meet once in their life. Thoughtful, genuine and warm. 'Bobby B' was one of a kind. He was the best kind. We mourn for the light that he brought to even the darkest of rooms, but we can hear him say, "Don't worry. Everything is gonna be fine." In lieu of flowers, donations can be made in his name to the American Foundation for Suicide Prevention. Bob had a deep love and passion for his Narcotics Anonymous fellowship, so if you want to throw in an extra dollar in the basket in his memory, he would love that. Due to the current health crisis, a celebration of life will be held at a later date.

The family of Robert Henry BAUMHOFF Jr. created this Life Tributes page to make it easy to share your memories.