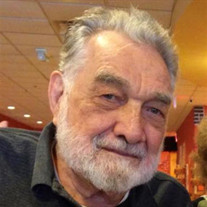 Richard Earl Strickland, 89, of Wentzville, MO., died Sunday, February 09, 2020 at his residence. He was born on August 16, 1930 in Greenville, MO. The son of the late Richard and Lillian Strickland. Richard Earl Strickland was born on August 16, 1930 to the late Richard and Lillian (Wood) Strickland in Greenville, Missouri, the third of four children. His family owned and operated a general store in town. He graduated from Poplar Bluff High School in 1948 and he maintained those friendships for the rest of his life. Richard was an expert storyteller and he would often reminisce about his wonderful childhood. He inherited his lifelong love of the St. Louis Cardinals from his father. Shortly after moving to Saint Louis, MO, Richard met Norma Hightower at a Halloween square dance in 1955. They married on May 9, 1956 and quickly started their family of six. While Richard and Norma raised their children, they often visited National Parks and their hometowns. This love of travel continued as Richard retired and they visited Hawaii, Florida, the Caribbean, and many other exotic places. Richard was a fervent believer in Jesus Christ. He joined Parker Road Baptist Church with Norma, and it became a second family to him for many years. While there, he was actively involved in Operation Christmas Child. He recently began attending First Baptist Church of Wentzville in 2019. In his later years, Richard was an avid Spades and Bridge player and he was always out to win the game. He enjoyed visiting with family, watching sports and old Westerns, reading his bible, and discussing politics. He was preceded in death by his loving wife Norma Jean, of 62 years; His sons Wallace “Lee” and James Strickland; and granddaughter Jennifer Strickland. His legacy lives on through his 4 children, Larry Strickland, Ken (Michelle) Strickland, Sandra (Michael) McMahon, and Laura (Vincent) Galati; 7 grandchildren, Joseph Strickland, Daniel Strickland, the late Jennifer Strickland, Megan (Austin) Nikolaisen, Justin Mancillas, Michael McMahon, and Miranda McMahon; 4 great-grandchildren Milliana Haynes, Reagan Haynes, Jordyn Nikolaisen, and Kamryn Nikolaisen. He is survived by his sister Mary Lou Owens and many other loving family members and friends. In Memory It broke our hearts to lose you, but you did not go alone. A part of us went with you, the day God took you home. If tears could build a stairway, and heartaches make a lane, we'd walk our way to heaven, and bring you back again. In life we loved you dearly, in death we love you still, in our hearts you hold a place no one could ever fill. There will be a memorial visitation Friday, February 14, 2020 from 10:30 AM to 11:15 AM with a memorial mass at 11:15 AM and a luncheon to follow at First Baptist Church of Wentzville, 653 Luetkenhaus Blvd, Wentzville, MO 63385. Those wishing to honor Richard's memory may make memorial donations in his honor to Samaritans Purse Operation Christmas Child by visiting https://www.samaritanspurse.org/what-we-do/operation-christmas-child/ and selecting donate.

The family of Richard Earl STRICKLAND created this Life Tributes page to make it easy to share your memories.