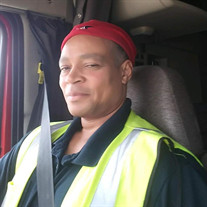 On Saturday December 26th of 2020 Raymond Lamont Davis Loving Fiancé, father of one child and two grandchildren passed away at the age of 51. Raymond was born on July 31, 1969 in East St Louis Illinois to Florence Elizabeth Davis. Florence was a single mother of two children Richard and Raymond Davis. Soon Willie Albert Douglas came into the family's life and became a loving husband to Florence and father of Richard and Raymond. Raymond was a very quiet shy and sensitive child that wanted to be to his self. He did not even want to talk so his parents would have to make him come out of his room and talk. As a child he loved to stay to his self no matter if he was indoors or outside. This stayed true throughout his adult life. Raymond was a quiet man but once he started talking, he loved to joke around and loved to laugh and make those around him laugh as well. If something was funny to him, he wanted it repeated several times to continue to laugh. As quick as he would start talking and joking, he would become quiet again. Raymond kept his life very simple as he was a hard worker as a truck driver, he was a great father who was very encouraging supportive and wise to his only daughter. He loved going to the gym, watching TV in his recliner, shopping for his home and most of all he loved to decorate his home. He would spend hours changing all the decor around until he got it just perfect to his liking. Raymond will truly be missed by so many he has touched our hearts and is an unforgettable person. Raymond is survived by Fiancé Wanda Donahoo, daughter Jasmine Davis- Thomas, two grandchildren Treveon and Hazel, father, Willie Albert Douglas, mother, Florence Elizabeth Douglas, Brothers, Richard C. Davis, Maurice A. Douglas, De Mario C. Douglas and many other family members and friends. John 5:28-29 28 Do not be amazed at this, for the hour is coming in which all those in the memorial tombs will hear his voice 29 and come out, those who did good things to a resurrection of life, and those who practiced vile things to a resurrection of judgment Acts 24:15 “I have hope in God, which they themselves also accept, that there will be a resurrection of the dead, both of the just and the unjust” (NKJV). The apostle Paul was defending His faith in Christ before Jewish leaders and in these words he stated that he had the same hope as they did; that there would indeed be a resurrection of the just and the unjust.

On Saturday December 26th of 2020 Raymond Lamont Davis Loving Fiancé, father of one child and two grandchildren passed away at the age of 51. Raymond was born on July 31, 1969 in East St Louis Illinois to Florence Elizabeth Davis. Florence... View Obituary & Service Information

The family of Raymond Lamont DAVIS created this Life Tributes page to make it easy to share your memories.