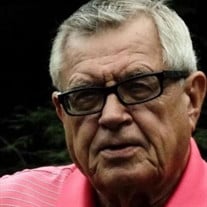 Peter Joseph Suchanek, 76, of O’fallon, MO, peacefully passed at his home on April 19th, 2022. “Pete” as his many friends called him, was surrounded by his loving and devoted family at the time of his passing. Pete was born and raised in Durham/Higganum area of Connecticut. Pete grew up hunting, fishing, and working on the Suchanek family poultry farm. He also excelled in basketball and baseball at Durham High School, all while delivering milk for Daniel’s Dairy Farm. After high school Pete joined the U.S. Navy and was assigned to a tour of duty in Vietnam aboard the U.S.S. Taussig as a signalman. Pete proudly received an honorable discharge after 4 years of service. Pete also served his community for many years on the Haddam Volunteer Fire Department as a volunteer fireman. After being discharged from the Navy he returned to his hometown, where he met the love of his life, Cheryl Suchanek (Beach). Pete and Cheryl were married on February 7th, 1968. Cheryl survives at the home after 54 years of blissful marriage. Pete started his career as a banker in Durham, CT. He decided he wanted something better for his family and took a job with Whirlpool Corporation, moving his family to Sunrise, FL. As was typical of Pete fashion, he successfully climbed the ladder and took a promotion with Whirlpool in Lenexa, KS, and again in Jefferson City, MO. Pete found a second hometown in Jefferson City, MO and believed this was the best place for him to settle down for a while and raise his teenage children. Pete took one last promotion, moving to O’fallon, MO, before retiring from Whirlpool after a 30-years. Pete was mostly known as a “Jack of all trades” and could fix anything due to his attention to detail. He was always being called on by friends and family to get their cars or lawnmowers running, plumb their fixtures, mud their drywall, or lend a listening ear. Everyone could count on him for anything they needed and that is one of the things he will be remembered for the most. Pete had two children, Christopher John and Tracy Ann. He took great pride in his children and strived to always make sure they had everything they needed to succeed and strive. Pete was always involved in his children’s sports, managing his son’s baseball teams from a young age all the way through his teenage years. One of his son’s fondest memories as an adult was playing the infield next to his father on the softball field. Pete wasn’t a homerun hitter on the softball field, but he could eloquently hit the ball anywhere he wanted it to go. On top of everything else, He was an avid golfer and St. Louis Cardinals fan. The friends he made on the golf course and the ball fields were always dear to him. His best friend, Dennis Foulk (Linda) gave him much comfort in the end and will never be forgotten by Pete or Pete’s family. Pete is survived by his wife of 54 years, Cheryl (Beach), one sister, Sharon Sima (Charlie), Children Christopher John (Jennifer), and Tracy Ann Suchanek. 6 Grandchildren, Bobbi, Jennifer Wells (Tyler), Austen Gibbs (Sam), Cody, Bailey, Blake, Samantha, and one Great Grandson, Finn Jacob. Pete has a niece Beth Vogel (Henry), a nephew Scott Sima, and many cousins, that will remember him for his wit and humor. Those who wish may send memorial contributions to Barnes Jewish Hospital Giving - Foundation - Barnes-Jewish Hospital (barnesjewish.org) or to your local Hospice Care Organization. God Bless you, Pete. Thank you for your service and continuous commitment to your family and friends. Miluju tě, pops

The family of Peter Joseph SUCHANEK created this Life Tributes page to make it easy to share your memories.