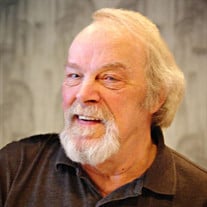 Paul Bernard Kruse, 76, of St. Charles, Mo., passed away at his home on Saturday, August 21, 2021, after an eight-month battle with cancer. He was surrounded by those who loved him most. Never one to complain, even when he was feeling his worst, Paul navigated his cancer diagnosis and treatment with unbelievable practicality. Despite setbacks and frustrations along the way, he always said, “This is all part of life,” and he never gave up. Remarkably strong and brave until the very end, Paul showed us all what it meant to live and die with immeasurable grace. Paul was born on October 20, 1944, in Breese, Ill., to Robert Kruse and Alvina (Gerling) Kruse. The youngest of six children, Paul found an early love of sports that continued into adulthood. While he eventually quit playing his favorites like softball and golf, he never stopped watching. An avid spectator of all sports, he loved watching his grandson Parker play most of all. He was a member of the Illinois Army National Guard and also served active duty in Germany during the Vietnam War. He had a long career as a meat cutter and was a retired member of U.F.C.W. Local 88. Paul married Lea Ann (Bechler) Kruse on January 30, 1971. They later divorced but remained close and continued to have a wonderful relationship until the day Paul died. An incredible father, Paul was a constant presence in his daughter April’s life. He was always ready with a hug, an “I love you, bud,” and little nuggets of wisdom that April will fondly remember. April will miss his voice, his smile and the quiet times they shared watching Jeopardy! and The Closer over the last eight months. Paul is survived by his daughter April (Jeremy) Klutenkamper, grandson Parker Klutenkamper, sister Alberta Garcia and sister-in-law Janette Kruse, along with many nieces, nephews, friends and extended family. He is preceded in death by his parents and siblings Robert Kruse, Jerome Kruse, Glenn Kruse and Thomas Kruse. Quick-witted and funny, Paul was immensely kind to everyone he met. There will never be a day when he isn’t incredibly missed and loved beyond measure. A visitation will be held from 10 to 11 a.m. at St. Cletus Catholic Church, 2705 Zumbehl Road in St. Charles, on Saturday, September 18, 2021, followed by a funeral mass at 11 a.m. A lunch will follow. Celebrate Paul’s love of sports by wearing your favorite team’s shirt or jersey.

Paul Bernard Kruse, 76, of St. Charles, Mo., passed away at his home on Saturday, August 21, 2021, after an eight-month battle with cancer. He was surrounded by those who loved him most. Never one to complain, even when he was feeling his worst,... View Obituary & Service Information

The family of Paul Bernard KRUSE created this Life Tributes page to make it easy to share your memories.