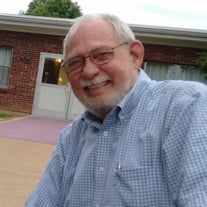 Paul E. Broseman (born in Mt. Vernon, NY), an avid entrepreneur and current resident of Wright City, MO, passed away unexpectedly July 11, 2019 at the age of 80 after complications from strokes suffered during heart surgery on June 7, 2019 at Barnes Jewish Hospital in St. Louis, Missouri. Paul is survived by his wife of 39 years, Joan M. Broseman (Beckham); his sons, Rick C. Broseman, Troy A. Broseman & wife Lynn; his daughters Tambi L. Maginnis & husband John, Regina G. Dowling & husband Keith and Atina L. Parris & husband Keith; he is also survived by the mother of his children, Joyce A. Broseman (Sylcox), 12 grandchildren and 9 great-grandchildren; his brothers Karl P. Broseman and Gary K. Broseman & wife Linda; and an abundance of in-laws, nieces and nephews. He is preceded in death by his parents, Paul C. Broseman and Elizabeth (Cronk); as well as his biological mother Freda Pearl Minter. Paul was lovingly referred to as “Tall Paul”, he loved living every day to the fullest, was well known for his positive outlook on life and his great sense of humor (which we were blessed with until the end). In his younger years he played drums and enjoyed being in a band, was involved in the ROTC, Civil Air Patrol and was a member of The Greater St. Louis Parachute Club (Greenville, IL) for 15 years where he accumulated over 1,500 jumps. Most of his employment and entrepreneurship was in cable TV engineering and computer repair. He and his wife lived in the Pacific Northwest, New Mexico and Indiana before returning to the Midwest. Paul’s love for small business allowed him to support the communities he served; he held the position of President at the Rotary Club in Belen, NM as well as a leader in the Belen Chamber of Commerce. He will be greatly missed by his family, friends and all that knew him. A private gathering was held at his sister-in-law and brother-in-law’s home in Wright City, Missouri for family members. At Paul's request, there will be no memorial service. In lieu of flowers, donations may be made to the American Heart Association.

Paul E. Broseman (born in Mt. Vernon, NY), an avid entrepreneur and current resident of Wright City, MO, passed away unexpectedly July 11, 2019 at the age of 80 after complications from strokes suffered during heart surgery on June 7, 2019 at... View Obituary & Service Information

The family of Paul E. BROSEMAN created this Life Tributes page to make it easy to share your memories.