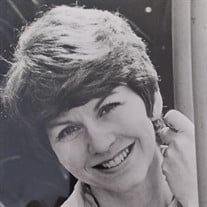 Pat King, amazing woman, wife, and mother, passed away February 21st at the age of 78. Pat was born Patricia Louise Norton on 3/28/42 in Madison, WI to TK and Ethel Norton. She had an older sister, Barbara Ann, who married at 18, when Pat was 11. She was then raised as an only child. Pat and her parents moved to Illinois when Pat was a teenager. She attended high school with actor Harrison Ford, and they shared some classes. Pat then attended Milliken University in Decatur, Illinois. She graduated in 1965 with a BA in Elementary Education and a Minor in Music. She taught first grade for six years, and later took a secretarial position with the Leo Burnett Agency in Chicago. This is where she met her future husband and soulmate, James King, in 1968. It was a bit of a whirlwind romance, and they married on December 23, 1968. It was clear that they were meant to be together. They were married for 52 wonderful years, devoted to each other until the end. Jim and Pat moved to St. Louis, MO. in 1970, and their first and only child, Tracy Lynn King, was born on November 30th, 1970. The family moved to California in 1973, as Jim’s career in advertising blossomed. Pat and Jim lived in various areas of California until Jim’s retirement in 2005, when they moved back to the St. Louis area where their only daughter Tracy lives. Pat enjoyed living in St. Peters, MO. with her husband, and close to her daughter, and she was laid to rest there at Memorial Gardens. Pat was an extraordinary person. She was beautiful, intelligent, optimistic, creative, kind, talented, and selfless, with a great sense of humor. In her high school and college years, Pat was always active with friends, clubs, dancing, and playing piano, and she was never without a boyfriend. She belonged to Alpha Chi Omega Sorority at Milliken University, and was runner up in the Miss Decatur, IL pageant. Pat was ambitious, and was always involved in things, including working various jobs throughout her life, lots of involvement in charitable endeavors, and even starting her own businesses. Her resume included secretarial work, court transcriber, and Mary Kay Cosmetics representative. Volunteer work included coordinating events and raising money for the San Diego Humane Society and other local charities, knitting baby caps for preemies at the local hospital, and local children’s theater. Pat was a major player in the local craft show world, where she sold handmade floral arrangements and crafts. She eventually began holding her own successful craft shows in our home, called Down on the Farm. Pat’s creativity and ambition kept growing, and in the 1980’s, she founded Bunny Hop Hand Knits, a premium line of hand knit children’s sweaters. Her sweaters were sold at craft shows and stores, including Nordstrom, and she had several employees working for her. In the 1990’s, she took her creativity, talent, and business acumen to a new level, opening up a 3000 square foot store, which she designed herself. Country Gardens Florals and Gifts was a successful venture, featuring supplies for floral and craft designers, as well as artificial floral arrangements, gifts, and collectibles. She was not only the creative force; she handled all the finances and employees as well. Her talents weren’t limited to her business ventures. Whenever our family moved into a new home, she took charge to make them just right, including completely redesigning kitchens, and designing expansions. Yes, Pat had a knack for interior design too. She chose cabinets, layouts, materials, paint colors, storage, and she used her sewing expertise to create custom drapes, bedspreads, valances, and more. Pat loved adding splashes of color, and her designs were always a success. There was nothing this woman couldn’t do! Another passion of hers was gardening. She loved choosing the flowers and plants and planning the landscaping to create beautiful, colorful gardens that she meticulously maintained. Over the years, Pat and Jim enjoyed traveling to Mexico, Hawaii, New Zealand, London, and Barcelona, for the 1992 Olympics. Her favorite was London. They both enjoyed these trips immensely, and they loved spending time together. It’s important to point out that during all of her activities, she still put her family first. She was home when Tracy got home from school, she prepared wonderful, healthy dinners for Jim and Tracy every night, and was always there for her family. Pat was a devoted, loving, supportive wife and mother, and she took great pride in that. She loved her husband and daughter completely and unconditionally, and they adored and admired her. And she always provided some comic relief, which made her family smile. Patricia Louise King will be in our hearts forever, and she will be missed more than words can say.

Pat King, amazing woman, wife, and mother, passed away February 21st at the age of 78. Pat was born Patricia Louise Norton on 3/28/42 in Madison, WI to TK and Ethel Norton. She had an older sister, Barbara Ann, who married at 18, when Pat was... View Obituary & Service Information

The family of Patricia Louise KING created this Life Tributes page to make it easy to share your memories.