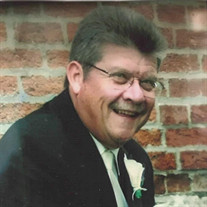 Orville Meredith Victor Welker passed peacefully at his home on August 2, to be with our Heavenly Father. He was 72 years of age. Born on August 28, 1947 to parents Harold and Elvira Welker of St. Charles County, MO. He was a lifelong resident of St. Charles County, MO. He is survived by the love of his life, his wife of 54 years, Linda Welker (nee Duncan). Also surviving are his 5 children; daughter, Kristine Parsons (nee Welker) and her husband Phillip, of Wentzville, and his sons, David Welker of Wentzville, Donald Welker and his wife Sonia, of Wentzville, Douglas Welker and his wife Maggie, of St. Charles, and Daniel Welker and his wife Cassandra, of Scott AFB, IL. He was the proud, loving grandfather of 19; Courtney O'Donnell (nee Parsons), Lindsay Jeffords (nee Parsons), Ashlyn Parsons, Joshua Welker, Andrew Welker, Amanda Welker, Christian Welker, Chad Welker, Kyle Welker, Bret Welker, Kaline Sowell, Marlee Bowman, Jaylee Bownman, Lily Welker, Violet Welker, Magnolia Welker, Keeley Welker, Burkley Welker, Riley Welker and great-grandfather of 6; Emily O'Donnell, Finnegan O'Donnell, Penelope Welker, Charlie Welker, Astoria Jeffords and River Jeffords. Orville was preceded in death by his parents and also his brothers, Wayne Welker and Calvin Welker. Surviving are his sisters; Marcella Fleer of Warrensburg, MO, Eunice Winkle of St. Charles, MO, Mary Potter of Forsyth, MO, Wanda Barnett of St. Charles, MO and Carla Robertson of Wentzville, MO. He was uncle and cousin to many. During his service in the U.S Air Force in the late 1960's, he pulled a one year tour of duty in Vietnam. He was a machinist by trade and began his own business in the early 1980's, Welker-Young Machine Co. Inc. with his business partner and dear friend, James Young. Today the business is still in operation, owned and operated by his children. All that knew him knew that he was quite a passionate bass fisherman. He especially enjoyed fishing with his fellow fishermen and dear friends, Walt Greenfield and Don Linns. He also enjoyed riding his Harley with his best buddy, Wayne Gibson. He adored and loved the time he spent with his grandchildren. Grandpa (aka Pop-pop) had a great sense of humor and was also quite the storyteller, always "pulling their leg" with his fractured fairy tales, making up his own silly songs, taking the time to make paper dolls or riding mini-bikes. Everyone that knew him also undoubtedly received some of his countless words of wisdom and fatherly advice. Whenever asked of his greatest achievement he would always answer, "my children." As he succumbed to leukemia, the family is requesting that any donations be made to the St. Jude Children's Research Hospital and to please consider becoming a blood donor and registering on Bethematch.org or Giftoflife.org to possibly be someone's lifesaving cure. The family would also like to thank everyone for their loving visits, kindnesses and condolences. Also a special thank you to the nurses of Heartland Hospice and not to be forgotten are the many doctors, nurses and staff of the SSM St. Louis University Cancer Center. A private memorial service will be held later this month on his birthday.

Orville Meredith Victor Welker passed peacefully at his home on August 2, to be with our Heavenly Father. He was 72 years of age. Born on August 28, 1947 to parents Harold and Elvira Welker of St. Charles County, MO. He was a lifelong resident... View Obituary & Service Information

The family of Orville Meredith Victor WELKER created this Life Tributes page to make it easy to share your memories.