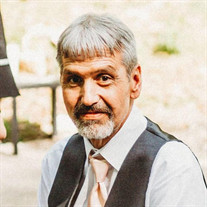 Michael “Mike” Obren Surrisi, 60, of St. Charles, MO passed away peacefully at DePaul Hospital Thursday, July 15, 2021, with his daughter Elizabeth, niece Megan and bonus daughter Lindsay, by his side. Mike was born February 3rd, 1961 in St. Louis, MO. He was adopted as an infant by Jean and Obren “Obie” Koprivica. After Obie’s passing, Jean remarried Michael “Mickey” Surrisi, who adopted Mike as well. Mike was a very talented man, and a jack-of-all-trades. He could fix anything around the house, enjoyed working on cars, and spent many years as a painter. He was also an avid fisherman, with a passion for the outdoors. Mike had a huge sense of humor, was the master of inside jokes, and could carry on an entire conversation in movie quotes. His unmistakable, uproarious laugh was as contagious as his smile. He was a longtime friend of Bill W., sharing his experience, strength, and hope with many. He will be deeply missed by all who knew him. Mike is preceded in death by his father Obren Samuel Koprivica, his mother Jean Lee Surrisi, his father Mickey Samuel Surrisi, his wife Carolyn Sue Relling-Surrisi, and his son, Michael “Mikey” Omar Surrisi. He is survived by his daughter Elizabeth Minardi and her spouse Michael Minardi, his son Robert Michael Surrisi, grandson Mads Michael Minardi, sister Maria Surrisi, and brother Michael “Big Mike” Surrisi, and former wife Barbara Thomas. Mike is also forever remembered by his numerous nieces, nephews, extended family, dear friends, and colleagues. There will be a memorial service at O'Fallon Christian Church on Monday 8/2/2021 at 10:00 AM. There will be light snacks and desert served afterwards.

The family of Michael Obren SURRISI created this Life Tributes page to make it easy to share your memories.