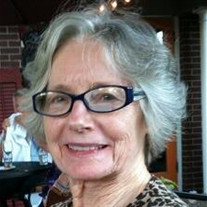 Mary Jo Rosecan of St Charles, MO, died at the age of 84 on Tuesday, September 3, 2019. She was born August 6, 1935, in Lewistown, IL and was the daughter of the late Leonard and Beulah Henderson. Mary Jo is survived by her children Debbie (Jesse) Wallace, Sandy Walters, and Beverly (Richard) Piehl; her brother Stanley Henderson and sister Patricia (James) Watts and many nieces, nephews and other relatives. Mary Jo is preceded in death by her parents, her sister Bonnie Coons, her husband Marvin Rosecan and her former husband, William Walters. Mary Jo enjoyed her work at the Radio Station and the Canton Daily Ledger. Mary Jo had an enjoyable experience as a member of the Canton Playhouse. This included working on the Playhouse from the beginning with many good friends. One highlight was when she played the role of Lizzie in the Rainmaker. Mary Jo was fortunate to travel throughout the United States and to many countries. One of her most memorable trips was to Rwanda to see the mountain gorillas in the wild. Another memorable trip was hiking through the Grand Canyon with family and friends. While living in St Louis, Mary Jo enjoyed volunteering with the Cancer Society, Girl Scouts, Temple Israel, Barnes Hospital and the JCCA. Mary Jo and her husband Marvin were one of the many founding members of the Repertory Theatre of St Louis. In the early 80’s Mary Jo moved to Austin, Texas with her husband and family. While there, she enjoyed doing yoga, pilates and weightlifting. One of her most memorable life events was when she became an instrument rated private pilot. Mary Jo enjoyed flying her blue dragon-emblazoned Piper Turbo Arrow from one end of the country to the other. Mary Jo enjoyed dancing, laughing and singing to the 40’s and 50’s tunes. She also loved to travel with her family and friends. Later in life, she loved to give hugs and make people smile. She will be greatly missed by all who knew her. A Celebration of Life party will be held at the American Legion Post #16, 550 S 4th Ave, Canton, IL 61520 on Saturday, September 21, 2019 from 2-6pm. In lieu of flowers, donations may be made to the Repertory Theatre of St Louis at www.repstl.org or the Saint Louis Zoo at www.stlzoo.org.

Mary Jo Rosecan of St Charles, MO, died at the age of 84 on Tuesday, September 3, 2019. She was born August 6, 1935, in Lewistown, IL and was the daughter of the late Leonard and Beulah Henderson. Mary Jo is survived by her children Debbie... View Obituary & Service Information

The family of Mary Jo ROSECAN created this Life Tributes page to make it easy to share your memories.