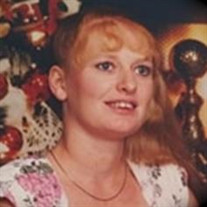 Lecia Marie Brown (57), born December 4th, 1963 to Alvin Wayne Brown and Margaret Anne Marie Davis, passed away February 11, 2021. Lecia was known for her long red hair and equally vibrant personality. Full of passion and generosity, Lecia impacted and bettered the lives of those around her—The lives of her children: Michael Whitaker and Robin Callahan; That of her siblings: Karen Harrison, Tina Boles, Allen Brown, Jennifer Brown, and Dawn Brown; That of extended family and beyond kin: The many also called her ‘Mom’, whom she cared for—and assisted –along with those in need when even struggling through hard times herself. Lecia was born in Saint louis and moved to both Nashville and later Burke city with her parents. A wandering spirit, she moved on her own countless times throughout her life as a young adult, finding homes in metro Saint Louis, Oklahoma, and Illinois. She only settled down in her later years in Saint Charles and Maryland Heights. Her list of adoptive family and friends grew with each relocation, and now it is too numerous to count. Personally, Lecia enjoyed small meetings with friends, classic rock, and sharing her memories. She searched for the wisdoms found only in nature, the love that only animals can provide, and those little joys in the darkest of times. For many, her greatest gift remains forever theirs to take: Lecia’s belief that, no matter the struggle, life is worth living as long as you dance to your own music.

The family of Lecia Marie BROWN created this Life Tributes page to make it easy to share your memories.