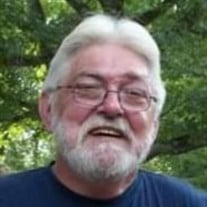 Larry Eugene Sadler, passed away surrounded by his loved ones in the comforts of his own home on June 15,2021 at the age of 75. He will be forever loved and forever remembered. No services will take place, as Larry requested, but we do appreciate... View Obituary & Service Information

The family of Larry Eugene SADLER created this Life Tributes page to make it easy to share your memories.

Larry Eugene Sadler, passed away surrounded by his loved ones...