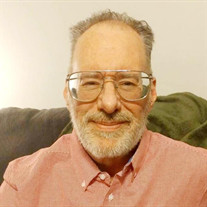 Mr. Kevin Gene Rees, of St. Louis, Missouri passed away on September 13, 2021, surrounded by his loved ones at Barnes St. Peters hospital in St. Peters Missouri. He went to be with his Lord at the age of 60. Kevin was born in St. Louis, MO on April 13th, 1961. He was the beloved child of Harold Gene Rees and the late Shirley Katherine King. He was the oldest of four children. Kevin went to Lindbergh High School Class of 1975. He Studied Business Administration at University of Missouri-St. Louis. Kevin was a proud salesman for many years at his father's company Color Dot Graphics. Kevin professed his faith in Christ an early age. He had two children during his eight-year union to Diana Louise Cunningham. He was very loved by his daughter and his son, his friends, and family. Kevin was preceded in death by his mother Shirley Katherine Rees. His grandparents Albert and Velva Rees and also his grandparents Pearl and Hardin (Smitty) Smith. He is also preceded in death by his beloved nephew Justin Moses. Kevin leaves his loving memories to be cherished by his dear family. He will be missed by his beloved father Gene Rees. He was dearly loved by his daughter Sarah Elizabeth Simpson, his son-in-law Jared Reed Simpson, his son Christopher Gene Rees and one precious grandchild Avilyn Nicole Jean Rees. Kevin will be missed by his sister Kelly Elizabeth Moses and her children TJ (Tim Jr.) Tosha, Tonya, Jesse, and Johnny. Kevin is loved and will be missed by his brother Kit Lee Rees, and his daughter Josie. Kevin cherished his family and always desired time with them. He also welcomed new family and considered all extended family his own. He enjoyed all the time he spent with his friends, especially his best friend Kelly Poole-Shackelford. He loved to play golf and loved to watch racing. He was always making us laugh. Life will not be the same without him and his unconditional love for everyone. Services for our loved one will be held at God's House of Ministry 3407 N. HWY 79 Elsberry, MO 63379 on Monday September 27, 2021 at 10:30 am.

Mr. Kevin Gene Rees, of St. Louis, Missouri passed away on September 13, 2021, surrounded by his loved ones at Barnes St. Peters hospital in St. Peters Missouri. He went to be with his Lord at the age of 60. Kevin was born in St. Louis, MO... View Obituary & Service Information

The family of Kevin Gene REES created this Life Tributes page to make it easy to share your memories.