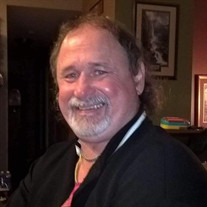 Kenneth Wayne Regot Jr., 59, of Wentzville, MO., died Sunday, February 16, 2020 at his residence. He was born on August 15, 1960 in St. Charles, MO. Son of Kenneth Wayne Regot Sr. and Wanda Regot (nee Collins) of Montgomery City, MO. Wayne married Ramona J. Browning (Rapa) in August of 1979 at the age of 18, and she was 17. They were married for 22 years. They had one son, Kenneth Wayne Regot III who married Jennifer Regot (Schwede), and one grandson Kenneth Wayne Regot IV (of Wright City, MO). Loving brother of Kammie Daugherty (of Warrenton, MO), Debbie Odle (of Warrenton, MO), Earle Dean Regot (of Montgomery City, MO), and Katie Regot (of Warrenton, MO). Also his loving girlfriend of the last five years, Kathy Daily. She took care of Wayne and was very dear to him. He has many aunts, uncles, cousins, nieces, nephews, great nieces and nephews. As well as many other family and friends. All will miss him dearly. He was preceded in death by his longtime fiancé Jill Bushdiecker, who passed away in 2013. Wayne worked for the labor local 660 as a laborer for 30 years, retiring in 2008. He loved his family dearly. He was always at the arrival of a new baby. Attended all the birthday parties for all the kids. He loved all kinds of sports, his favorites being football, boxing, MMA, baseball and Nascar. There will be a Celebration of Life on Saturday, February 22, 2020 from 12:00 PM - 4:00 PM at the Laborers' Local 660, 2633 W Clay St, St Charles, MO 63301. Those wishing to honor Wayne's memory may make donations to any charity of the donor's choice.

The family of Kenneth Wayne REGOT Jr. created this Life Tributes page to make it easy to share your memories.