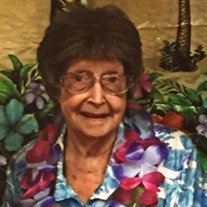 Julia Margaret Denner (nee Bresnahan) December 5, 1917 – February 5, 2022 Julie was born December 5, 1917 in St. Louis, MO. She was one of six children born to the late Cornelius and Hannah (Killoran)Bresnahan. All her siblings preceded her in death: John (Georgia) Bresnahan Marie (Harry) Lake Katherine (Tom) Stretch Winifred (John) Adelsberger Margaret (Clarence) Mc Callister Julie had many nieces and nephews Sister Vincella was very special to her and they kept in touch throughout the years. Julie’s parents were direct descendants from Ireland and she prided herself on her Irish heritage. Julie was baptized at St. Mathews on December 16, 1917. In her adult years she attended Pilgrim Lutheran Church and was confirmed on April 6, 1941. On May 31, 1945 she married Gene Arthur Denner at Pilgrim Lutheran Church. In 1947 they were blessed with their only child a beautiful daughter, Sheila Ann. Sheila was born on June 24, 1947 and over the years brought an enormous amount of love and joy to them. She was the mother-in-law to the late Jim Dewberry and Jim Tuller Julie was blessed with one grandchild, a grandson, Jason Dewberry of Franklin, Tennessee and was Great-Grandmother to Jason’s three children Bryce, Parker and Rowyn Dewberry. Throughout 104 years of Julie’s life, she acquired many friendships. Some stuck out in her mind of some of her most precious memories and accomplishments. Just to share a few she jotted down throughout the years on multiple note pads: Linda (Kramer) Peters John and Claudette (Mungle) Snelson Phil Wicks the late Phil Crawford Steve Everingham - these were her youth group kids. She said being involved with these kids and being their leader were the best years of her life. They too said; “she was a huge part of theirs”. Neighborhood kids and Sunday school kids. Kids she had fond memories or stories to tell. Gary Gay, Donna Vaughn, the late Zoe Ann Haynes, Barbara (McHugh) Schoen Mary Lou Lorman, Faith Steif so many more. Julie and Gene moved to Jaycee Fairgrounds 1982 where they called home. In October of 1983 Gene Denner passed away. During her 39+ years at Jaycee Fairgrounds she made numerous friends and acquaintances. Way too many to list, but each of them knew her heart and where they filled their place. Julia loved organizing events, outings and loved socializing. She square danced for many years traveling from one place to the other. Arthritis would steal that joy from her, but it never broke her spirit or her faith. When her daughter Sheila became ill and her fight against a rare blood disorder turning to Leukemia she reached out and asked a friend to help care for her mom Julie. That would become her mother’s caregiver and dear friend. (A little girl she had known all of her life, Jeannie (Kramer) Nevins. Jeannie and Bill cared for Julie the remainder of her life. Together they assisted with any and all care that Julie needed. It was more than a friend’s request; it became a huge pleasure for them. Julie was passionate about volunteering. She volunteered for the nursing home next to her apartment for 8 years Jaycee apartments for 28 Years Salvation Army as a Bell Ringer for 30 Years and the Senior Center for 35. She was elected the President of Golden Ages through the Salvation Army and also her Senior Group. She also taught Sunday School at Elim Lutheran Church for their 4th Grade class She led their Youth Group at Elim “WALTHER LEAGUE” She taught vacation bible school at Elim After moving to St. Charles, she transferred her membership to Immanuel Lutheran. She volunteered there for many years until crippling arthritis restricted her, but she never lost her wittiness or her faith. Julie lived her life to the absolute fullest. She never lost hope or faith. She continued to follow her faith with in home visits from Immanuel’s visiting pastors. She will be remembered as a strong, independent, faithful, caring, kind, generous lady who never let life steal her joy.

The family of Julia Margaret DENNER created this Life Tributes page to make it easy to share your memories.