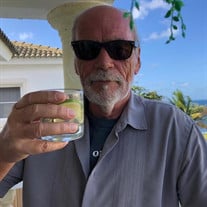 In Loving Memory of John Fulton Reynolds III John Fulton Reynolds III, of Sosua Dominican Republic, formerly of St Charles Mo, passed away on Wednesday Sep 1 in the Dominican Republic at the age of 66. John was born Aug 9, 1955, to the late John Fulton Jr and Willia Faye Reynolds, she survives, in St Charles MO. He was a 1974 graduate of McCluer High School and he grew up in Ferguson Mo. John married Judi K Gordon, and had two sons John Fulton Reynolds IV, and Nicholas Ryan who both preceded him in death. He is survived by Shawne Evans a stepdaughter and Kiley Horton a step granddaughter. John then married Teresa Vance Diekhoff in Mar 1993 and they were married until Aug of 2013, and she survives. John then met his partner Terri Smith, and she survives. John is survived by his brother Michael (Kelly) and niece Rachel and nephew Brandon. John is survived by many aunts and uncles and cousins who loved him dearly. John was Paramedic for St Charles County Ambulance District from 1984 to 2008 and was named Paramedic of the year in 1987. He served as the President of the International Association of Firefighters Local 3410. With the merger of IAFF local 3410 to 2665 John then served as the Executive Vice President. John was the Manager of the Professional Firefighters of Eastern Missouri Union Hall and Complex in St Peters Mo. Then in 2018 he retired and moved to Sosua Dominican Republic to fulfill his dream of retiring to the beach. He made many wonderful friends on this adventure and loved being a part of their community. John loved to travel and has traveled to many warm and sunny beaches in his life. He never met a stranger, always looked for good conversation and good people to enjoy in a good cocktail with. He will truly be missed by his family and his firefighter and paramedic families. A Celebration of Life will be held on: Friday, October 29, 2021 from 5:00pm-10:00pm at the Professional Firefighters of Eastern Missouri Hall 115 McMenamy St Peters MO 63376 Those wishing to honor John's memory may make Memorial donations to: BackStoppers - http://www.backstoppers.org 10411 Clayton Road Suite 203 St. Louis, MO 63131 Gary Sinise Foundation - http://www.garysinisefoundation.org P. O. Box 368 Woodland Hills, CA 91365 St. Charles Ambulance District Outreach Program 235 Jungermann Road Suite 193 St. Peters, MO 63376.

The family of John Fulton REYNOLDS III created this Life Tributes page to make it easy to share your memories.