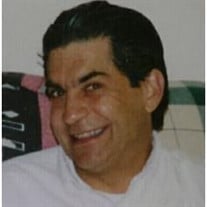 John Anthony Fumagalli 06/11/1957 – 11/24/2014   John was born the 6th child of the late Charles A. Fumagalli and late Dorothy M. Fumagalli [nee Shortal] on June 11, 1957 in St. Louis Missouri.   John is survived by his children Michael Fumagalli [Angela], Marie Fumagalli, and Alex Fumagalli.  John’s grandchildren include Taylor Fumagalli and Stephanie Lane.     John’s surviving siblings include James [Lorine] Fumagalli, Judith Fumagalli [Donald Shaw], Robert Fumagalli [Peggy], Joan Fumagalli, Dolores Fumagalli, Thomas Fumagalli [Dolores] and Margaret [Peggy] Colletta [Gregory].  John was preceded in death by his oldest brother Charles [Charlie] Fumagalli.   His many nieces and nephews include, Charles [CJ] Fumagalli [Mary], Anjanette [Anji] Fumagalli, Kalen Fumagalli [Jill], Elise Fumagalli [Vince DiSchino], Erica Fumagalli, Korey Fumagalli, Lauren Claiborne [David], Andrew Fumagalli, Katie Fumagalli, Samantha [Sammy] Fumagalli, Sarah Fumagalli and Carmen Fumagalli.   John is a Great-uncle to Anthony, Corey and Daniel Fumagalli, and Kinsey, Keagan and Gleason Claiborne.    John is the nephew of Sr. Dolores Shortal, O.P., the late Joseph Shortal, the late Sr. Rosaire Fumagalli O.S.U, and the late Teresa and Edwin Smith.  John also has many cousins and wonderful friends. John was blessed to enjoy the love of Tammy Keathley, Alex’s mother.     No matter the trials and tribulations of John’s life the one constant and undeniable truth is the love he has for his children.    John’s early career was manager of housekeeping and deliveries for a number of the old Famous Barr stores.  He closed the Northland Famous many years after his father was involved in opening that same store.  He was instrumental in the opening of the Famous Barr’s at St. Claire Square and Alton Square in Illinois and the Galleria in St Louis.  He was given the rare opportunity to meet Elizabeth Taylor when she announced her White Diamonds cologne at the Galleria.  Quite the moment for him and all he could say was “she is just beautiful!!”    As John’s career changed, he opened a painting business with friend Richard Schademann.  He later ventured out on his own as Fuma’s Painting and More.  John was more than meticulous in his manner of painting and wallpapering.  He sometimes would bid a job at 2 days and it would take him 5 because he had to get it “right” – there were no short-cuts when it came to his work.  His sharp mind could fix anything – it had to be right for his customers.  Things may have been “his” way as he clearly inherited the gift of ingenuity from his father.  A perfectionist at his work – he was totally, 100% a perfectionist.    John loved to be outdoors.  He had many adventures fishing and hunting with his brothers and friends, especially Buddy Prosser, Dave Blackburn, John Harrington, Tom Wagner, David Camp, Scott Gray and many others.  One of his favorite places to camp was Sam A. Baker State Park and he had the opportunity to revisit the park late this past summer with Tammy & Alex.     He especially enjoyed spending time at Danville Conservation Area in Montgomery County Missouri.  So much so that he choose Danville as his final resting place.   A special debt of gratitude to John’s care-givers over the past year – his son Mike and family, his sister Judy, The Pillars of North County Nursing Home, Alternative Hospice and Heartland Hospice.  There is a special place in our and God’s heart for everyone who cared for and loved John.    John had many struggles in his life and was a lifelong participant of AA.  John will be greatly missed by his loving family and friends and we know John is at peace with our loved ones in Heaven.    John is being care for by Alternative Funeral and Cremation Services. . Visitation will be held on Saturday, November 29, 2014 from 11 a.m. until 1 p.m. with a service immediately following at the funeral home.

The family of John Anthony FUMAGALLI created this Life Tributes page to make it easy to share your memories.