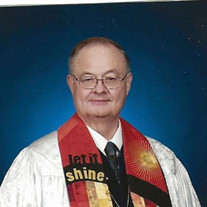 John Francis Attaway, 76, of St. Charles, MO., died Wednesday, July 14, 2021, at St. Joseph Hospital in St. Charles, MO. He was born on October 8, 1944, in Abilene, TX. John was adopted at the age of one month by Elizabeth Mae Simpson Attaway and Wade Glenn Attaway and grew up in Midland, Texas. John graduated from Midland High School in May of 1963. He was an Eagle Scout and also earned the God and Country award. John was married on July 18, 1998, to Christine Lynn Phillips in Marinette, Wisconsin. John received his B.S. with a double major in Religion and Sociology from Phillips University in Enid, Oklahoma and later went on to earn a M.Div. from Phillips Seminary. John had additional professional training in counseling, working with AIDS patients, and substance abuse counseling and in being a hospital chaplain and as a pastoral care specialist. John was ordained November 1, 1976, into the ministry and served The Church of the Brethren as a pastor before becoming a pastor in the United Church of Christ. Over the years, John served churches in Oklahoma, Texas, Kansas, Wisconsin, Florida, Iowa and now Missouri. In addition to being a local parish pastor, John was involved with working substance abuse counseling, helping the homeless, working with persons with HIV/AIDS, serving as a hospital chaplain and in prison ministry. Much of his life was centered on helping others. John served in the Navy Reserve for a total of eight years reserve time and two years active duty, March of 1967 – March of 1969 which was served largely around Vietnam, much of it in the Mekong Delta area assisting the River Patrol Boats. He was stationed on the LST 1170, the U.S.S. Windham County. While in active service, John received the Bronze Star, Vietnam Campaign Medal, Vietnam Service Medal, Combat Action Ribbon, Unit Commendation, Navy Unit Commendation, RVN Meritorious Commendation along with several other medals and ribbons. In addition to Vietnam, John was in Japan, Korea, Taiwan, the Philippines, Thailand, and several other countries. John was proud to have served in the Navy. He belonged to the American Legion and is a member of the VFW. John had no brothers or sisters and his father died in 1955 and his mother in 1988. John enjoyed the beauty of nature, photography, collecting antiques, working with stones and making jewelry, reading, traveling and many other interests. John had been active in the Boy Scouting movement attending two National Jamborees and earning both the Eagle and God and Country awards. John always had a special love for nature, animal and travel. He visited a total of 48 states and 10 countries. He loved to read everything from theology and religious books to history and action novels and Westerns. John overcame many struggles in his life having been born with a bad speech defect as well as reading and writing learning disorders. John took speech therapy for six years trying to overcome this handicap. John is survived by his wife Christine Lynn Attaway, stepdaughter Amy Lynn Thatcher and her husband Jared Thatcher. There will be a memorial service at St. John’s United Church of Christ Weldon Springs on Wednesday, July 21, 2021, at 10:00 AM. There will be a committal service with military honors at Jefferson Barracks National Cemetery on Wednesday, July 21, 2021, at 1:30 PM. Those wishing to honor John’s memory may make memorial donations in his name to the Five Acres Animal Shelter by visiting https://www.fiveacresanimalshelter.org/ and selecting on donate.

The family of John Francis ATTAWAY created this Life Tributes page to make it easy to share your memories.