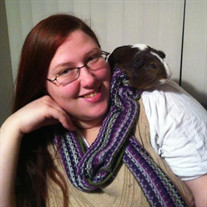 Jessica Louise Kennett was born on November 20, 1981 in St. Louis County. She was the eldest daughter of Daniel and Jennifer Kennett. She was joyous, full of life and loved by all she encountered. Throughout her life, Jess had a passion for learning - which only deepened when she discovered her love for Culinary Arts. The marriage of both her passions resulted in her being awarded two diplomas in 2010 from Le Cordon Blue College of Culinary Arts and Patisserie & Baking. She continued mastering her craft by taking additional online courses. As a skilled and accomplished Chef, many opportunities were afforded her; such as, Trail Smokehouse where she excelled as a Kitchen Manager. She would later climb the corporate culinary ladder and become General Manager at two different food establishments; Rally’s and Marcos Pizza. Jess loved to live life to the fullest. She enjoyed so many things in her lifetime. She loved to listen to music, sing out loud, read books, watch movies, and play board games. She also had a deep-rooted love for her family. In 2000 she embarked upon motherhood and became a mom to a baby boy named Matthew. Three years later she gave birth to a baby girl named Adrianna. She later met and married Darryl Davis, and to this union another baby boy, Darryl Jr, was born. A nurturer by nature, she had a great love for animals as well, with a special heart for all of her kittens. Gone way too soon, our Jessica Louise Kennett-Davis departed this life on April 20, 2021, at the precious age of 39 years old. She was surrounded and supported by her loving family and friends. Jess leaves to cherish her memories: her husband, Darryl Davis Sr., her three children, Matthew Francis 21, Adrianna Schlueter 18, Darryl Davis Jr., 12 and her parents, Daniel and Jennifer Kennett. She is also survived by: Theresa Sandoval (birth grandmother), Sharion Lindley (mother in-law), David Kennett (brother), Danielle Kennett (sister), Chris Gonzales (brother in-law), Shakita and Leon Perry Jr. (sister and brother in-law). She was a fun-loving aunt to five nieces and nephews: Maria Buckner 13, Gianna Gonzales 6, Arabelle Gonzales 2, Leon Perry III 4, and Selena Perry 3. Jess had a total of twelve aunts and uncles, a host of first and second cousins (too many to name individually), family and friends, all of whom she loved sincerely. “Those we love don’t go away. They walk beside us every day. Unseen, unheard, but always near; still loved, still missed, still very dear.”

Jessica Louise Kennett was born on November 20, 1981 in St. Louis County. She was the eldest daughter of Daniel and Jennifer Kennett. She was joyous, full of life and loved by all she encountered. Throughout her life, Jess had a passion for... View Obituary & Service Information

The family of Jessica Louise KENNETT-DAVIS created this Life Tributes page to make it easy to share your memories.