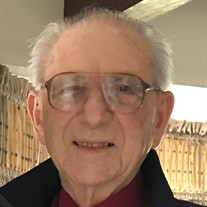 James Carlin Pickens, aged 91, went home to be with his Lord and Savior on January 31, 2021. Jim was born September 1, 1929, at home, near Marion, Kentucky, the eighth of 11 children, six boys and five girls. On August 18, 1950, he joined the U.S. Air Force. After completing his four years, he was honorably discharged and enrolled at Murray State University. On July 27, 1956, he married Peggy Ann Styles. They had one daughter, Karen Pickens (Hazelwood, MO). Jim was a loving husband, dad, uncle and friend. He was a selfless, generous and kind, always putting others needs and wants above his own. He was known as Grampa Jim to numerous “adopted” grandkids. They were a joy and a delight to him. He loved them dearly and spoiled them often. Jim was a member of Grace Baptist Church, St. Charles, MO, where he served as deacon and financial secretary. As long as he was physically able, he was there for workdays and always seeing what needed to be done and doing it. His favorite part of working at the church was when the grandkids would stop by to say hello. He is survived by his daughter Karen, his brother John Pickens (Mississippi), other relatives, many friends and all of his chosen grandkids. Visitation will be Saturday February 6th from 9:30 am – 11:00 am, with the celebration of his life beginning at 11:00 am. Visitation and services will all be held at Grace Baptist Church, 3601 Ehlmann Rd., St. Charles, MO. 63301 In lieu of flowers, the family asks that donations be made to: Grace Baptist Church, designated for Creative Access Missions.

The family of James Carlin PICKENS created this Life Tributes page to make it easy to share your memories.

James Carlin Pickens, aged 91, went home to be with his Lord...