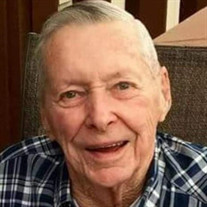 James Pilney O’Hara was born in Norwich, NY on June 23, 1927, and at the age of 93 years, he signed off on a life well-lived on September 22, 2020 in St. Charles, MO. His parents were Ruth Pilney O’Hara and Raymond Maxwell O’Hara; he had one sibling, a sister, Peggy (O’Neill). Jim was raised in Cleveland, Ohio. This is where he discovered the Cleveland Browns. As a child, he was privileged enough through connection to sit on the bench with the players and watch Paul Brown coach his beloved team. Despite the team’s attempts to make a Super Bowl appearance his love and support for the team never wavered, and in fact was passed down to more than one son. He attended St. Ignacious High School and went on to attend John Carroll University as a History major, fostering his love of books and travel - a huge part of his adventurous life. James enlisted in the Army Air Corp and was honored to serve during both World War 2 and the Korean War. Jim met Edith Mary Johnson on a blind date in 1950 while stationed at Westover Air Force base in Massachusetts. Six months later, they wed and went on to have eight exceptional children. seven sons and one daughter. After the military, Jim worked for TWA across 3 decades. For 20 years Jim traveled the world with his wife and eight children and at one point they lived in Saudi Arabia for 4 years. From the East Coast to the West Coast, and all ports in between Jim and Edith made homes and more importantly friendships that would last a lifetime. After retiring from TWA, the family moved to Tucson, AZ where Jim was hired by the Arizona Dept. of Corrections. His love of people and his good story telling and listening skills helped him make real connections with the inmates where they developed a mutual respect for one another. Once Jim retired for the second time, they moved back to New England & settled on Cape Cod becoming very active in their church. Their faith was always central to them and soon sent them on another adventure to serve as missionaries in Tirana, Albania. Jim leaves behind his beloved wife of 70 years, Edith. In addition he leaves his eight children Gunnar, Kevin (Anne), Dorothy O’Hara-Pinkham (Scott), Patrick (Christine), Michael (Kathy), Danny (Marcia), Denis (Kim) & Christopher (Cindy). Jim was also blessed with 21 grandchildren, 25 great grandchildren & 2 great-great grands. All of these contributed to his love of a good martini - olives only please! Jim will be greatly missed by all who loved him - but we have great peace and joy knowing we will see him again. “See you later alligator”.

The family of James Pilney O'HARA created this Life Tributes page to make it easy to share your memories.