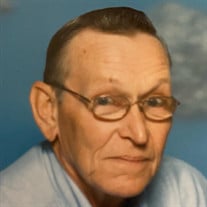 James (Jay) Calvery Martin, Sr., 81, of St. Charles, MO, passed away on April 7, 2021 in his home surrounded by his loved ones. Jay was born May 27, 1939 in St. Louis, MO. He graduated from Des Arc High School in 1960 and then enlisted in the United States Navy and served as a Gunnersmate on The USS Morton until May of 1964. He married his soulmate, Carolyn, on October 27, 1964 and resided in St. Charles for most of those years. He worked as a Machinist at Leonard’s Metal in St. Charles before moving to Piedmont where he worked at Walmart before retiring in 2002. He is survived by his wife of 56 years, Carolyn Martin, of St. Charles. Together, they have 4 children, James C. Mott (Sissy) of Baytown, Texas, Paula J. Ivy, James C Martin, Jr. (Kelly), and William C. Martin (Jenny) all of St. Charles and 2 brothers, Vaughn Martin, Lesterville and Ronnie Martin, Bonne Terre. He was blessed with 11 grandchildren and 15 great-grandchildren. He is preceded in death by his parents, Calvery and Lena (Kendricks) Martin, 3 sisters, Mary Lou Talley, Des Arc, Joan Hinkle, Des Arc, and Delores Dunn, Ironton. A Celebration of Life service will be held on April 12, 2021, 5-7 p.m. at Alternative Funeral and Cremation Services, 2115 Parkway Drive, St. Peters, MO.

The family of James Calvery MARTIN Sr created this Life Tributes page to make it easy to share your memories.