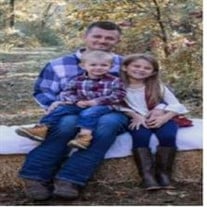 After a 6-month battle with a rare and aggressive cancer, James Matthew Bash Luckett, passed away on March 31st, 2021 at BJC Hospital in St Louis, MO at the young age of 34. He leaves behind his children who were his world, his daughter, Gracie LeeAnn Luckett, and his son, Liam Cash Luckett. A Celebration of Matt’s Life is currently being planned and will be announced soon. Matt was born on December 31st in Mexico, MO, the son of James & Sandra (Terry) Luckett, who survive at their home. Matt graduated from Community R-VI High School in 2005. He had worked Construction most of his life and made a lot of memories and friends with it. Matt loved being with his kids, family, and friends. Matt was always the person you could turn to for help whether it was figuring out construction related, to working on your vehicle, or just having a fun time with a lot of laughs. He loved to make people smile and laugh, he loved to light up the room, he loved all his friends and family. Most of all Matt was a very loving and caring Dad & Uncle. His nieces meant a lot to him and his children were his everything. He will be sadly missed & lovingly remembered by his children, Gracie LeeAnn Luckett & Liam Cash Luckett of Auxvasse, MO; his parents, James & Sandra Luckett of Rush Hill; his sister, LaRanda (Trent) Loyd of Mexico; four nieces, Jeyla (Jose Arellano Angel) Luckett, Jazlin Luckett, Joleigh Loyd & Mali Loyd all of Mexico; his grandma, Phyllis Terry of Vandalia; his aunt, Patricia (Terry Martin) Terry of Mexico; his uncle James (Lisa Fecht) Terry Jr. of Santa Fe; a few friends that were like brothers to him, Kyle Culbertson, Chris Arens & Rick Belcher along with several cousins and friends. Matt was preceded in death by a brother, William Joseph Luckett, his grandparents William Otis & Rosemary Leigh Luckett, James Dwayne Terry, his uncle John Wayne Luckett and several close friends gone too soon. The family ask that in Lieu of Flowers please make memorial donations for Matt’s children Gracie & Liam. Memorial Donations may be made to the Family of James “Matt” Luckett, c/o Arnold Funeral Home, 425 S. Jefferson, Mexico, MO 65265

After a 6-month battle with a rare and aggressive cancer, James Matthew Bash Luckett, passed away on March 31st, 2021 at BJC Hospital in St Louis, MO at the young age of 34. He leaves behind his children who were his world, his daughter, Gracie... View Obituary & Service Information

The family of James Matthew Bash LUCKETT created this Life Tributes page to make it easy to share your memories.

After a 6-month battle with a rare and aggressive cancer, James...