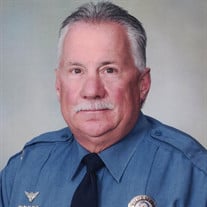 James Charles Larkin, 65, passed away peacefully on December 7, 2020 after a courageous battle with COVID-19. Jim bravely served his community of St. Peters, Missouri for 28 years as a law enforcement officer, and the City of Berkeley prior. He was also a master of all trades, and there wasn't anything he couldn't fix. Jim was the guy everyone called for help with a project, and no matter what, he always jumped at the chance to help a friend in need. He especially enjoyed riding his motorcycle and manning the grill. Jim proudly served as Pitmaster at virtually every barbeque he attended. An avid outdoorsman, Jim enjoyed hunting, fishing, boating, camping - living every day to its fullest. As a lifelong fan of the St. Louis Cardinals, he rarely missed watching a game. More than anything, Jim was a family man. He loved his family dearly and looked forward to spending his retirement traveling the country and making memories with his precious grandkids. Jim will forever be missed by the love of his life, Cindy Foster. Proud father of Stephanie Larkin and step-father of Torre (Anthony) Finazzo, Tyler (Michael) Nitz, Russell and Andrew. His grandchildren Kadence Gray and Kennedy Gray and step-grandchildren August Nitz and Graham Nitz, meant the world to him. Loving brother of Deborah (Herbert “Kurt”) Meyerpeter. Further survived by his beloved nieces, nephews, other relatives and friends. Jim was preceded in death by his parents, James F. Larkin and Joan E. Larkin (nee Trostel) and niece, Jamie Meyerpeter. Due to public health concerns and event restrictions, a private memorial service will be held for the family. Condolences may be expressed to the family online at alternativefuneralcremation.com. In lieu of flowers, donations may be made to The BackStoppers, Inc. www.backstoppers.org or St. Louis Children’s Hospital www.stlouischildrens.org

James Charles Larkin, 65, passed away peacefully on December 7, 2020 after a courageous battle with COVID-19. Jim bravely served his community of St. Peters, Missouri for 28 years as a law enforcement officer, and the City of Berkeley prior.... View Obituary & Service Information

The family of James Charles LARKIN created this Life Tributes page to make it easy to share your memories.