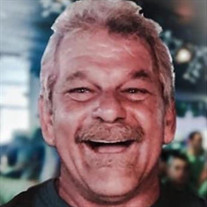 James L. Beck, Sr., also known as “Jim” or “Jimmy”, 57, of St. Charles, Missouri, passed away at his home on Monday evening, September 20, 2021, surrounded with love after an intense and courageous battle against cancer. He was a wonderful father to his three children: Jeanette Erdelen, James (Jimmy) Beck, Jr. and Ashley Beck, father-in-law to Kristen Beck and a loving grandpa to 8 grandchildren. He had a passion for his work in construction and built many great things. He would always mention building his own home from the ground up one day and he most definitely had the skills to do so. Jim was a man of steel but had a heart of gold. His children, grandchildren, family, and friends were the world to him. He was definitely a one-of-a-kind man but also someone you’d be blessed to have in your life. The type of man that would do anything for you. He had a love for being out on the river on his boat, couple drinks, good music and great company. If Jim wasn’t working like the hardworking man he was or out on his boat in the summer, he’d be enjoying his favorite thing - riding his Harley, whether it was a short trip around town or traveling the States and having a great time with his friends laughing and making memories. His love for Harley Davidson never went unnoticed or ended. His Harley motorcycle was his pride and joy and we hope to honor him with his one last Harley ride to Heaven. He was preceded in death by his mother, Jeannie (Sweazey) Callaway and his brother, Leslie Eugene Schneider. He is survived by his father Gerald Throne, stepmother Mary Groff-Throne, his sisters Rhonda Regot and Dana Guess, three brothers Joseph Beck, Jr., Greg Throne and Eric Throne, three children, daughter-in-law and 8 grandchildren. Visitation will be held on Friday, September 24, 2021, at Alternative Funeral and Cremation Services from 12:00 PM to 2:00 PM, with a graveside service at Oak Grove Cemetery in St. Charles immediately following.

The family of James Lawrence BECK Sr. created this Life Tributes page to make it easy to share your memories.