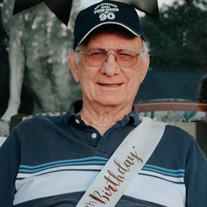 Ira Walter Monroe, 90, of St. Charles, Missouri, passed away peacefully at his home on Saturday, November 16, 2019. He was born on May 14, 1929, in Walnut Ridge, Arkansas. Ira was a creative force with an inquisitive mind. He served in the United States Army as a Sergeant from March 13, 1951 until February 4, 1953, earning several medals and commendations. During his military career, he fought in the Korean War. Upon exiting the United States Army, Ira worked for McDonnell Douglas in St. Charles, Missouri as a Detail Inspector until retirement. Ira was also a Master Free Mason. In his younger days, Ira enjoyed playing the electric guitar in several bands, listening to music, going dancing with his bride and good friends, maintaining his yard and garden, spending time with his grandchildren, using the computer, and browsing eBay for deals. He loved the "thrill of the sale" that eBay provided. Ira would buy ball chain necklaces, in bulk, to carry his many cell phones. He would also buy large quantities of watches, then gift them to his children and grandchildren. He never passed an opportunity to make someone smile, specifically Audrey. He is best known for bragging about his beautiful wife and his many grandchildren. Ira is preceded in death by his loving parents, Cleatus Randolph Monroe and Ora Gertrude Monroe (nee Wilkerson); sisters, Ruth Monroe and Helen Monroe; brother, Cleatus Monroe Jr.; and grandson, Shawn P. Cannon. Ira is survived by his wife Audrey Monroe (nee Spathelf); his children, Pamela Cannon, Nancy (Allan) Riddel, and Steven Monroe; his grandchildren, Kristina (Eric) Foster, April (James) McPherson-Anderson, Jesse (Jessica) Cannon, Elise (Jeremy) (former spouse Brian) McCoy-Fuka, Heather (Sara) McPherson, Michaela (Nicholas) Brune, and Luka Riddel; his great-grandchildren, Justin Cantu, Julian McPherson-Anderson, Shawn K. Cannon, Marshall Foster, Noah McCoy, Wyatt McCoy, Havana Brune, Wilhelmina Brune, Gabriel "Niko" McPherson-Anderson, Theo Brune (due January 2020), Randy LaMountain, Nick Fields, and Savannah Fields. Ira was a loving and devoted husband, father, grandfather, great-grandfather, and friend to many. He will be deeply missed by all who loved him. A joint memorial will take place at Frieden’s UCC at the corner of Zumbehl and Hwy 94 (City of St. Charles) on Saturday, December 7th at two in the afternoon to honor both Ira W. Monroe and his son Steven L. Monroe whom just passed away days after the death of his beloved father. Please come and share stories of the Monroe men with family and friends.

Ira Walter Monroe, 90, of St. Charles, Missouri, passed away peacefully at his home on Saturday, November 16, 2019. He was born on May 14, 1929, in Walnut Ridge, Arkansas. Ira was a creative force with an inquisitive mind. He served in the United... View Obituary & Service Information

The family of Ira Walter MONROE created this Life Tributes page to make it easy to share your memories.