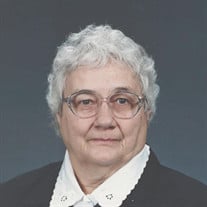 Hilda Irene Kimberly, age 85, passed away peacefully October 7, 2020 when her heart was too tired and sad to keep beating. She was born July 28, 1935 in Baden Station, Missouri to Ernest Fredrick Reese and Esther (Wisdom) Reese. She graduated from Winfield High School in 1953 where she enjoyed playing basketball. She was united in marriage to Joseph Richard Kimberly on November 8, 1953 in Troy, MO and they were together celebrating their 25th Wedding Anniversary. During their married life she was a devoted wife, mother and homemaker. She enjoyed cooking, sewing, and gardening fresh vegetables and colorful flowers. After the loss of her husband she went on to work at Monsanto/MEMC from 1978 till her retirement in 2001. She was the beloved mother of Joann (Mike) Dressel of St. Charles, MO, Joseph (Pam) Kimberly of Lenexa, KS, Helen Boren of Pineville, SC and Gail Ann Brough who also preceded her in death. She cherished her time as a grandmother of Kimberly Dressel, Matthew Dressel, Christopher Dressel, Bridget (Clayton) Hess, Erin (Jim) Elwood, Elizabeth (Debbie) Kimberly, Anthony (Erin) Kimberly, Richard (Annie) Boren, Ryan (Melanie) Boren, Terry Brough, Jr and Jonie (Mitch) Workman. She is survived by her sister, Esther Anna Rottger of Troy, 19 great grandchildren, 2 great-great grandchildren which she will not be here to greet and her many nieces and nephews. She was preceded in death by her husband, Joseph Richard Kimberly, her daughter Gail Ann Brough, her parents Ernest and Esther Reese, her sister Helen Buster and her brother Ernest Earl “Butch” Reese and one son-in-law Rickie Gene Boren. She will be dearly missed and forever in our hearts. Family & friends are invited to a Celebration of Life on Saturday October 10, 2020 from 1:00 p.m. to 3:00 p.m. with a service at 3:00 p.m. at Alternative Funeral & Cremation Services, 2115 Parkway Dr., St. Peters, MO 63376 Friends and family wishing to honor Hilda’s memory may choose to make a memorial contribution to St. Paul United Church of Christ or BCI (Boone Center).

Hilda Irene Kimberly, age 85, passed away peacefully October 7, 2020 when her heart was too tired and sad to keep beating. She was born July 28, 1935 in Baden Station, Missouri to Ernest Fredrick Reese and Esther (Wisdom) Reese. She graduated... View Obituary & Service Information

The family of Hilda Irene KIMBERLY created this Life Tributes page to make it easy to share your memories.