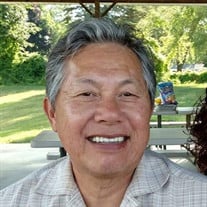 Hien Trong Nguyen passed tragically on Saturday, June 1, 2019, on his family property surrounded by his loving wife, sons and daughter-in-law. Hien was born in 1958 in Vietnam to Nhiem and Ba Nguyen. He had eight siblings and grew up in poverty during a war-torn time. At the close of the Vietnam War, 16-year-old Hien escaped Vietnam by fishing vessel, leaving his family behind. He eventually came to the U.S. in 1975. He faced many challenges during his lifetime, one of which was coming to the U.S. alone and without English skills. In 1975 Hien was adopted by Delores and Carlos Brown. After the family moved back to the St. Charles area, he met his wife Debbie (McLain) Nguyen of 36 years. The two married in 1983 and began their life together, eventually having four children, Curtis, Matthew, Kayla and Emily. Being baptized in 1979, Hien became a member and faithful servant of the O’Fallon Church of Christ in O’Fallon, Missouri, where he put his skills to use with the upkeep of the building and grounds. He also helped many of the church family with repairs and projects. He served others by opening his home to many who were homeless and needed a place to live. Hien (Hienja) was a skilled carpenter and worked as a commercial drywall hanger becoming a foreman and general foreman. He worked for almost 30 years until he became disabled and had to retire. He was a long-time member of Carpenters’ Local 32. He was also a jack of all trades and sought to learn all aspects of the building trades, eventually building his own home. Providing a decent living and a future for his family was a priority that he took seriously, as he had experienced tremendous poverty, hunger and even homelessness during the war. Hien was resilient, strong, determined and hardworking. He was generous, goofy and loved to tease. He enjoyed the outdoors, hunting, cooking and watching country western, martial art and action movies. He loved to document his family’s gatherings, activities and undertakings in picture and video form, many times catching them in unflattering moments. He also loved watching St. Louis sports. He was a die-hard Cardinals and Blues fan (LGB!). Most of all, he loved spending time with his family. He will be missed on Facebook by many. Hien was an amazing Ong Noi to Willa and Emma and wonderful Ong Ngoai to Jaxon, who he babysat during the week. He loved spending time with his grandchildren and cooking their Vietnamese favorites. His passing leaves a big hole in the lives of his family and friends, and he will be deeply missed and remembered fondly. He had many family members. He is survived by his loving wife Debbie Nguyen; son Curtis and wife Jessica, granddaughters Willa and Emma; son Matthew; and daughter Emily and husband Sam, grandson Jaxon. He was preceded in death by his daughter Kayla. He is also survived by his father-in-law Joe and wife Loretta, sister-in-law Rachel, brother-in-law Sam; mother-in-law Barb; sister-in-law Becky and husband Stan; brother-in-law Mike and wife Tomoko; brother-in-law Chris; and brother-in-law Johnny. In Vietnam, he is survived by his brother Nhiem and wife Thu; brother Nghi and wife Muon; sister-in-law Lan; brother Hau and wife Le; sister-in-law Doan; sister Hanh and husband Thin; sister Phuoc and husband Hai; and brother Hiep and wife Nhung. He is preceded in death by father Nhiem, mother Ba, and brothers Nhan and Hai. In his adoptive American family, he is survived by his parents Carlos and Delores; sister Shari and husband Wayne, brother-in-law Don; sister-in-law Vickie; sister Carla and husband Steve; sister Cara and husband Pat; sister Cari and husband Rick; and brother Greg. He is preceded in death by sister Sandra and brother Dwight. He is also survived by additional American family members including Ma Imogene; sister Rhonda and husband Tim; brother Gary; sister Zenna and husband Thom; brother Kevin; and brother Timothy and wife Gennifer. He was preceded in death by Pa Bill. He is survived by numerous aunts, uncles, nieces, nephews, great nieces and nephews, cousins and friends. In lieu of flowers donations can be made to: The HCMA www.4HCM.org and Christian Family Services of St. Louis www.STLCFS.org There will be a memorial visitation at O'Fallon Church of Christ, 8576 Veteran's Memorial Pkwy., O'Fallon, MO 63366 on Sunday, June 09, 2019 from 2:00 PM - 5:00 PM with a service to follow.

Hien Trong Nguyen passed tragically on Saturday, June 1, 2019, on his family property surrounded by his loving wife, sons and daughter-in-law. Hien was born in 1958 in Vietnam to Nhiem and Ba Nguyen. He had eight siblings and grew up in poverty... View Obituary & Service Information

The family of Hien Trong NGUYEN created this Life Tributes page to make it easy to share your memories.