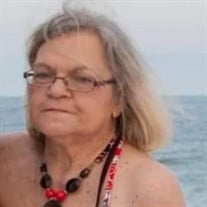 Harriet “Charlene” (Benedict) Osterhaus born on July 19, 1951 gained her wings at age 68, peacefully with her loving daughter’s at her side on Sunday, July 12, 2020. Services will be held Friday, July 17, 2020 at Alternative Funeral & Cremation Services, 2115 Parkway Dr. St. Peters, MO 63376. Visitation will be from 1 pm to 3 pm. Eastern Star Service will begin at 3 pm. Charlene was born in Flat River, MO, daughter of Charles M. Benedict and Ruby (Black) Benedict. She had a loving brother, Charles A. Benedict. She joined Jobs Daughter’s and then became an active member of The Order of Eastern Star for 47 years. Charlene graduated from Halter High School, Class of 1969. A few years later, she met the first love of her life, Robert Lee Massie. They married in 1974 and had 2 beautiful daughters, Jennifer (Massie) Hyde and Melissa (Massie) Schneiderjohn. Robert Lee Massie passed away in 1998 at the young age of 48. She was fortunate enough to find the second love of her life, Richard J. Osterhaus in early 2000. They married in 2001 and she gained two additional beautiful daughters, Kimberly (Osterhaus) Grigorian and Tammy (Osterhaus) Reynolds. Charlene and Richard found their dream home together in the country and moved to Troy, MO where they created and cherished beautiful memories together with family and loved ones. She began her 30 year career at Jewish Hospital as a phlebotomist. Upon Jewish Hospital merging with Barnes, she then became a patient care technician for many years. She had a strong passion for taking care of the sick and elderly. Charlene was a loving woman with a strong personality. Everyone who met her immediately would be drawn to her quirkiness and compassion for others. She always spoke her mind, and was an honest woman. She loved her brothers and sisters of The Order of Eastern Star, as she was a dual member of both Bridgeton and Troy, MO Chapters. Charlene leaves behind many loving family members. She was preceded in death by her parents, brother, both husbands, and 3 brother in-laws. Charlene is survived by her daughters, Jennifer (Massie) Hyde, married to John Hyde Jr., Melissa (Massie) Schneiderjohn, married to Anthony Schneiderjohn III, Kimberly (Osterhaus) Grigorian, and Tammy (Osterhaus) Reynolds, married to Rodney Reynolds. Brandice (Massie) Barnfield, married to Kenneth Barnfield was technically her niece, but was considered her daughter. Grand-children include: Ashley, Gina, Samantha, Helena, Bridgette, Alexus, Erin, Alex, Caitlyn, Matthew, Austin, Zach, Phillip, Nicholas, Wendy, Presley and Vedder. Great grandchildren include: Elijah, Kaleb, Brooklynn, Alaina, Keagen, Brinlee, Tobias, Kaylee. Charlene is fondly remembered as “Charlie,” “Char,” “Charzie,” “Harry Dewitt,” just to name a few. It wasn’t until she was in kindergarten and attendance was called that she discovered her REAL first name was Harriet. A few of her favorite things were HGTV, Thrift Store Shopping, Flea Markets, reading books, creating unforgettable memories playing games, cards, dice with her family. “Don’t think of her as gone away – Her journey has just begun Life holds many facets The Earth is only one Just think of her as resting From the sorrows and the tears In a place of warm and comfort Where there are no days and years Think how she must be wishing That we could know today How nothing but our sadness Can really pass away And think of her as living In the hearts of Those she touched For nothing loved Is ever lost- And she was Loved so much” Author Unknown

The family of Harriet Charlene OSTERHAUS created this Life Tributes page to make it easy to share your memories.